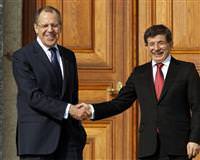 The second round of negotiations between Iran and the Western world begins today in Istanbul. The summit takes place while the government crisis in Lebanon continues to deepen.

A new series of nuclear negotiations between Iran and the Western world begin today in Istanbul. Prior to the P5+1, made up of Russia, China, USA, France, England and Germany, and Iran's meeting, Foreign Minister Ahmet Davutoğlu, who returned empty handed from Lebanon, shifted his efforts of persuasion to the Eastern Block.
Hosting the political directors of the P5+1 and Iran at a round table at the Çırağan Palace, Davutoğlu's concern was that the irreconcilable situation in Lebanon would negatively affect negotiations in Istanbul.
After a 36-hour meeting marathon with Qatari Prime Minister Sheikh Hamad bin Jassim al-Thani in Lebanon, Davutoğlu explained yesterday that he has not lost hope; however they have put further negotiations on hold until the leaders in Lebanon have spoken themselves.
'Turkey would never stand back from any form of newly initiated efforts nor would they halt their efforts in absolute terms, especially for an allied and fraternal nation such as Lebanon. We will always continue to exert any form of effort for stability and will stand by our forever friend and brother Lebanon, however rather than us exerting any new efforts; it is now time for the sides in Lebanon to think."
Expressing that Lebanon is a mosaic in the region, Davutoğlu stated, "A crisis to erupt from here would only increase the situation enflamed in the region which started with Tunisia. We put forth a lot of effort to ensure the meetings were not dampened, whenever requested we will exert efforts again."
WE WERE LEFT ON OUR OWN...
Davutoğlu was left on his own, by Syria, Saudi Arabia, Egypt and the West, in his efforts to prevent another civil war erupting in Lebanon. The following are the problems Davutoğlu faced:
Saudi Arabia: Having already previously announced their decision to put on hold the resolutions made with Syria on the issue, Saudi Arabia also reiterated their stepping back on one of the most prominent television stations in the region while Davutoğlu was in meetings in Beirut.
Syria: They did not choose to exert their influence over Hezbollah and left Turkey alone in Lebanon, a country they consider as their backyard. Furthermore, the issuing of 30 arrest warrants placed Hariri in a difficult position.
Egypt: Egypt was perpetually against any initiatives and felt this crisis needed to be solved by Lebanon alone.
The West: With USA at the forefront, the West supported the announcement of the indictment over the Hariri assassination filed by the international court.

'A HISTORICAL STEP'
Yesterday in Istanbul, Foreign Affairs Minister Ahmet Davutoğlu and his Russian counterpart Sergey Lavrov held a Joint Strategic Planning Group meeting for the High Level Cooperation Council established with the Russian Federation last year. Speaking at a joint press conference held after the breakfast meeting, Davutoğlu referred to the signing of a visa agreement between Turkey and Russia in Moscow in the upcoming months as, 'a historical step'. Lavrov expressed his pleasure at witnessing the activities of Turkish contracting companies operating in Russia and stated that last year alone over three million Russian tourists vacationed in Turkey and with the waiving of visa regulations, this figure will only increase.
12 MEETINGS IN 36 HOURS
FOUR MEETINGS WITH HEZBOLLAH: Minister of Foreign Affairs Ahmet Davutoğlu's trip to Beirut lasted for 36 hours. Having left Turkey at around 13:00 on Tuesday, Davutoğlu returned to Istanbul yesterday morning at around six. Within this timeframe, Davutoğlu participated in 12 different meetings, four of which were with Hezbollah.
JUST LIKE THE MOVIES: A diplomat who also went to meet Hezbollah leader Hasan Nasrallah described the experience as being 'just like the movies'. Explaining that he was not allowed to enter with a cell phone, the diplomat went on to state, "One by one, we exited the rear entrance of the hotel. First we got into cars. Then, we were taken to a location where we entered the building only to exit through a different door and get into other cars."
NUCLEAR SUMMIT OVERLOOKING THE BOSPHORUS: Today, for the first time ever, Istanbul hosts a summit to which they are impartial. The P5+1 and Iran, begin a second round of nuclear negotiations across the Bosphorus. By calling the meetings in Istanbul, 'the last chance', Iran has effectively increased pressure on the West.
MEETING HELD IN UNDISCLOSED LOCATION: The meeting between the P5+1 nation's political directors and Iran's National High Security Council Secretary and Nuclear Negotiator Saeed Jalili will take place in the Çırağan Palace. However, the exact location of where the meetings will be held will remain undisclosed at the request of all sides. In previous international meetings, a tent was erected in the garden of the Çırağan as a press center, however this time; it has been moved to the Feriye Conference Center.

'How I can forgive my father's murderers?'
During his meetings in Beirut, Lebanese Prime Minister Saad Hariri stated the following to Foreign Affairs Minister Ahmet Davutoğlu, "Should I not try to find my father's murderers? We have to see the indictment". Meanwhile, Hezbollah leader Hasan Nasrallah said to Davutoğlu during their meeting, "We are not killers."