For 18 years now the pain has not subsided… 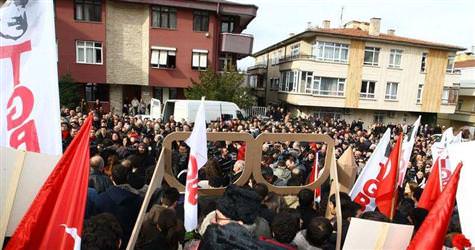 Assassinated in an explosion from a bomb placed under his car in front of his home on January 24th, 1993, journalist and writer Uğur Mumcu was commemorated yesterday in ceremonies held throughout Turkey on the 18th anniversary of his death.

In the capital, yesterday's commemoration began in front of Mumcu's home located on Gaziosmanpaşa Uğur Mumcu Street and ended at his grave at the Cebeci Asri Cemetery.
Hundreds gathered in front of his home in Ankara to commemorate the late writer including CHP Chairman Kemal Kılıçdaroğlu, former CHP Chairman Deniz Baykal, Uğur Mumcu's wife CHP Izmir Deputy Güldal Mumcu, and his children Özge and Özgür Mumcu as well as a number of CHP deputies.
After the ceremony, his wife Guldal Mumcu, daughter Ozge and son Ozgur placed candles and carnations on his monument. Kılıçdaroğlu and Baykal also paid a private visit to the Mumcu family in their home. Upon his exit, CHP leader Kılıçdaroğlu stated to members of the press, "The pain has still not subsided. The dark forces behind this murder needed to be brought to light. The state has not yet done all that they should have. We have proposed that light be shed on the perpetrators, however the Justice and Development Party rejects every proposal we have given them. I hope those responsible are brought to light and that justice is served, as is their duty." Kılıçdaroğlu later placed candles and carnations on the wall, which was damaged in the explosion 18 years ago.

Meanwhile, during the ceremony it was announced that on Monday morning, Mumcu's family filed a criminal complaint with the Ankara Chief Public Prosecutor's Office against officials they claim were negligent in the investigation of their case and in bringing the perpetrators to justice.
MEMORIALS FOR MUMCU
Uğur Mumcu was commemorated throughout the nation yesterday on the 18th anniversary of his death. In Istanbul, members of the CHP District Organization paid a visit to the Mumcu memorial in Harbiye, leaving carnations and chanting slogans condemning the murder. Istanbul District Chairman Nebil İlseven stated; "Mumcu has left deep scars on our lives."