"I want the two-party system" 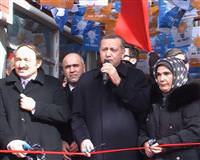 By stating, “I want this system,” Prime Minister Erdoğan offered up his clear support of the ‘two party assembly scenario’ which has been debated in capital lobbies for awhile now.

Prime Minister Tayyip Erdoğan responded to a question posed by the press; "For a long time, there has been discussion on you wanting to switch to a two-party assembly system. Is this true?"
Erdoğan states: "The truth is, yes. I think this is a beneficial system. This is because parliaments are more effective in a two-party system and the administration is more stable. Look at America. I'm not saying it needs to be the same system, but you witness how laws are made. We experienced an example of this in the Commercial Code. Somehow it ended it up that the opposition offered their support and the legislation was passed within three days."
Erdoğan participated in an opening ceremony for 41 facilities in Ağrı yesterday, where he also offered up criticism of the opposition, "We have a vision as big as the Ağrı' Mountain, however they criticize us for printing Ahmedi Hani's magnificent works in both Turkish and Kurdish, they are uncomfortable with TRT Şeş, they can't seem to tolerate democracy."