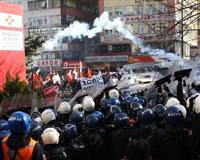 Police fired water cannons and tear gas to force back thousands of workers and students trying to march on parliament in the Turkish capital on Thursday in a union-led demonstration against a draft labour law.

The demonstration was unrelated to the turmoil sweeping Egypt and elsewhere in the Middle East.
Opinion polls show Prime Minister Tayyip Erdogan's ruling Justice and Development Party, known as the AK Party, well set to win a third term in power at parliamentary elections due in June, though analysts note an increasing polarisation of Turkish society between secular and conservative Muslims.
The protesters responded to the water cannons and tear gas by throwing stones at the police. Television news channels put the size of the protest at up to 10,000 people, though a Reuters journalist present said it was less than half that number.
The workers were protesting against new employment legislation, currently being debated by parliament, which they argue will reduce workers' rights and allow employers to exploit unregulated labour.
The government says the law is needed to create a more flexible labour model.
Opposition deputies were supporting the protest.
The protesters, converging on the capital from as far away as Izmir in the west and Diyarbakir in the southeast, were aiming to form a human chain around parliament.
Interior Minister Besir Atalay had warned the unions that a protest would not be allowed at the parliament.
The AK Party government has overseen a period of unprecedented economic growth in Turkey. While reformist on economic issues, the AK Party is conservative on social issues.
The party denies opponents' accusations that it is pushing an Islamist agenda by stealth, weakening Turkey's secularism.