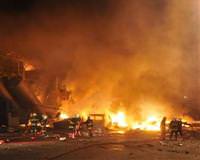 Two explosions in the same industrial complex took place in the capital yesterday within nine hours of each other. Seven were killed in the first explosion and ten in the second.

Yesterday, Ankara experienced a nightmare of a day, the true outcome of which was not determined until the late hours into the night. According to the latest reports, the death toll from two explosions yesterday has soared to 17, with over 30 wounded. Ten to 12 workers are suspected to still be stuck under the rubble and hope for their survival is beginning to dwindle…
The Ankara Chief Prosecutor has announced that they have initiated an investigation into the explosions which have resulted in 17 deaths.
The first explosion took place yesterday at around eleven am at a hydraulics machinery factory in the OSTİM industrial complex in Ankara. Seven workers were killed in the explosion while 23 were wounded, four of which are in critical condition. According to initial findings, the blast may have been caused by the oxygen tubes used on sight.
SECOND EXPLOSION
The second blast to rattle the capital yesterday took place at 19:0 last night at an automotive paint and thinner production site located one kilometer's distance from the first explosion which took place earlier in the day. A series of paint and thinner tanks were also triggered to explode following the initial blast resulting in flames engulfing a wide circumference of the area. A number of nearby LPG vehicles were also ignited in the blast and subsequently blew up. Ten workers were killed in the explosion and 13 were wounded. Governorship officials have emphasized that the two blasts were not connected in any way, however according to sources they both may have originated from oxygen tubes exploding.
After the explosion last night at around 19:30, intensive efforts were made to contain the fires followed by search and recovery efforts which went on until three in the morning. Rescue efforts resumed again this morning. Meanwhile, a number of citizens reported that they have yet to hear from their relatives or close ones and they are continuing to wait at the scene secured by police officers for any news. The wounded are being treated at a variety of hospitals throughout Ankara.
PRIME MINISTER INSPECTS THE SCENE
Prime Minister Recep Tayyip Erdoğan, State Minister Zafer Çağlayan, Interior Minister Beşir Atalay, Minister of Industry Nihat Ergün as well as a number of deputies arrived to the scene to be briefed by officials. Prime Minister Erdoğan offered his condolences to those close to the workers that were killed in the explosion. Minister of the Interior Atalay made an announcement in which he stated that doctors are doing all they can to help those wounded, and that all of Ankara has mobilized to assist. In regards to the cause of the blast, Atalay states. "The business owner has some ideas; however we need to wait for the technical inspection to be completed."