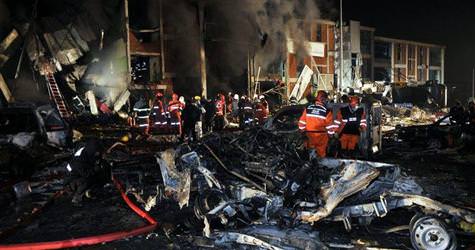 The recent explosion in Ankara has put a spotlight on other possible risky regions. In Istanbul alone, there are almost 5,000 facilities squished throughout the city. The plan that will save the mega metropolis however, is ready…

The double explosion in Ankara has turned all eyes onto other areas that could also be triggered. According to research, Istanbul is especially trigger-happy as one of the most risky regions in the nation. Accordingly, there are potentially 5,000 businesses ready to explode, literally. The research, conducted by the Environment Ministry, shows that 70 percent of these factories are within the city walls, while just 30 percent operate on the outskirts in organized industrial areas such as İkitelli and İMES. The majority of firms within the city are clustered in the Bağcılar, Kâğıthane, Okmeydanı, Esenler, Güneşli and Topkapı districts.

INDUSTRY IN SILIVRI
The Istanbul Governorship and the Metropolitan Municipality have been working intensively to establish a new industrial map for the city. The first stage involves moving approximately 5,000 firms, claimed to be environmental pollutants, from throughout the city to Silivri. Also part of the plan, two industrial parks, called Organized Industrial Areas or OSB, will be built on the outskirts of the city. One of these so-called industrial parks will be in Silivri. In 2008, the area designated was announced as being for industrial production. This ten million meter squared area also includes a number of residential projects for Turkey's Housing and Development Administration. As for the Anatolian side of the city, plans are being made to develop near the border with Kocaeli.

INSPECTION FOR INDUSTRIAL PARKS
According to the 30,000 firm industrial park, Ikitelli's Organized Industrial Region's Vice-President of the Executive Board Nuri Konak, states that operations in Organized Industrial Areas tend to cause less environmental pollution and also pose less risk. Konak does draw attention to the fact that OSB administrators should have more authority to conduct inspections. "Unfortunately there are thousands of companies that pose a risk for explosions. Some of these businesses are located outside of the city, however some are on the bottom floors of apartment buildings. All of them are uncontrolled. We conduct regular inspections of businesses operating within the industrial center, however even our inspection authority is limited."