'A lesson needs to be learned’ 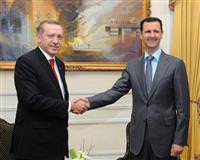 During a meeting with Syrian State Leader Bashar Assad, Prime Minister Erdoğan brought up the Egyptian public’s democratic demands and stated, “A lesson needs to be learned from what has happened.” Assad shared plans to further reforms in Syria.

Prime Minister Recep Tayyip Erdoğan met with the Syrian State Leader Bashar Assad during a trip to Aleppo. After participating in the opening ceremony for a dam along the Syrian border with Syrian Prime Minister Naji al-Utri, Prime Minister Erdoğan boarded an OBA helicopter for Aleppo. The meeting between Assad and Erdoğan took place in the Prime Ministry, where Assad greeted Erdoğan upon his car's arrival. Assad also had a brief conversation with Erdoğan's daughter Sümeyye Erdoğan. Later, the two leaders, accompanied by Syrian Prime Minister Naji al-Utri and Foreign Affairs Minister Ahmet Davutoğlu held a closed session meeting, in which the press was allowed to only briefly shoot footage. Erdoğan and Assad began their discussion by touching upon the barrage to be built along the Asi River. Calling it a, "productive investment," Assad was briefed about the plans for the dam. Erdoğan stated, "Let's finish the body of the dam by the same day next year. Then, the following year, we plan to have completed the electric and watering system."

EGYPT ON THE AGENDA
During the meeting with Assad, emphasis was placed on the recent developments in Egypt. Erdoğan shared details of his conversation with U.S. President Obama as well as with other state leaders on the issue. Bringing up the Egyptian public's legitimate demands for democracy, Erdoğan also expressed that the bloodshed must come to a halt immediately and that "a lesson needs to be learned from what has happened."
Erdoğan also stated that the recent events should not lead to further upset in the Middle East. Expressing that he shares Erdoğan's views, Assad stated that the Syrian administration has been conducting reforms for a long time now and plans to take them even further. The other item discussed during the meeting was Lebanon. Assad expressed his belief that the new government will establish stability in the nation and offered his support on the issue. Erdoğan replied to Assad that no matter which government is in power, Turkey will continue to support stability in Lebanon. After the meeting, the two leaders shared a meal at the base of the Aleppo Castle.

"WE WILL WORK TOGETHER"
In a joint announcement released on the internet by the prime ministry press center, emphasis was made on the importance of high-level and transparent dialogue between the two nations for the continuing of collaboration as well as for regional issues. The announcement also stated, "We hope that the Egyptian people's demands and expectations are met and that both sides will work together to prevent any further suffering."