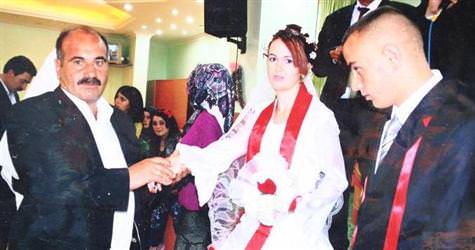 Two cousins from Muş, employed as waiters in Marmaris, eloped with two English sisters one year after the other. The girls’ family came to the Eastern province, requesting 100,000 TL each for the two daughters’ bride price. After some bargaining, the groom’s family paid out 15,000 TL each and they exchanged rings.

Born and raised in Bulanık, Muş, Ramazan (22) and Cüneyt Gül (22) began working in the touristic town of Marmaris after they finished high school. In June of 2007, they both began working as waiters in a hotel. It was there, Ramazan fell in love with an English girl. Seventeen at the time, Kelly was in Marmaris vacationing with her family. She was staying in the hotel where Ramazan was employed. With his pigeon English, Ramazan shared his feelings with Kelly, who responded affirmatively.

THEY RESEARCHED CUSTOMS
When their fling turned into love, the couple decided to get married. When her family learned of their intentions, they objected. Upon which, the two lovebirds ran off to Bulanık. Kelly's family tracked them down and paid a visit themselves to Bulanık. However, before they arrived they did some research into Turkish traditions. When they learned that there was a tradition of paying out to the bridal family, they decided to request 100,000 Turkish liras from the groom's family. At first the Gül family was surprised to receive such a demand, they were also concerned about how high the English family's request was.

SAME STORY A YEAR LATER
Kelly's family threatened to go to the police and take their daughter home, if they weren't paid out and the Gül family decided to negotiate. Both parties began to engage in intense bargaining. When Ramazan's family agreed to give Kelly four bracelets and 15,000 TL, Kelly's family accepted. Ramazan and Kelly then had a traditional wedding. However, this is not where the story ends…
Ramazan and his cousin Cüneyt returned to work in Marmaris in June, 2008. Kelly's parents also returned to Marmaris for a vacation accompanied by their 17-year-old youngest daughter. This time, it was Cüneyt who became close with Nicole, whom he had also harbored feelings for since first meeting her the year prior. Once again, the two lovebirds fled to Bulanık. The young British girl's family had to once again follow their daughter to Muş. The same bargaining was conducted all over again, and 15,000 TL was offered for their younger daughter's hand. Married in an official ceremony, Cüneyt and Nicole brought a daughter into the world a year later. Due to their spouses' jobs, the English sisters spend nine months of the year in Istanbul and three months in Bulanık. They have adapted well to Turkey in such a short period of time. They have both converted to Islam and Kelly has become 'Fatma' while Nicole has taken on the name 'Ayşe'.

'THEY ARE BOTH VERY HAPPY'
Ramazan Gül's older brother Metin Gül, who works in the textile industry in Istanbul, claims they are 12 siblings and states, "we hosted the English family. When they saw how much we care, we were able to reach an understanding. Then my cousin, arrived with the younger sister. They are both very happy." Gül even described a joke the two families share. "Our British in-laws have two other younger daughters, aged 9 and 12 and sometimes we tease them that when they grow up, we will also marry them off to our younger brothers or nephews."

'It's nice to have someone stake your claim'
Kelly Fatma Gül, who is slowly learning Turkish, states that she is getting more and more used to Turkey. "At first, I was a little worried. Here I was, far away from my mother and father and close ones in a faraway country. But I had found happiness. The hardest struggle for me was with the food, because meat is central to the cuisine here. However, I have slowly gotten over it. It makes me happy to see how the men here stake claims on their wives. That is what connects me most to here and to my husband. My sister and I are living very happy lives with our husbands."