"I need to hear your opinions" 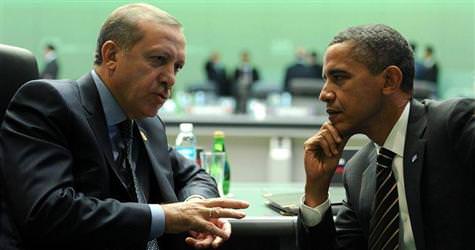 United States President Obama not only paid three telephone calls to Prime Minister Erdoğan, but he also told him, “you are the most significant figure in the region, I need your opinion. Your statements contributed greatly to Egypt.”

SABAH has accessed the details of three telephone conversations made by the American President to Prime Minister Tayyip Erdoğan in order to discuss the crisis in Egypt. The first call was made by President Obama to Erdoğan on January 29th to discuss the start of the public uprising in Egypt, while the last call took place on February 12th. During the conversations, Obama pointed out Erdoğan's significance in the region and stated that he needed to hear his opinion. The most recent conversation between Obama and Erdoğan took place on Saturday, February 12th, in order to discuss the developments in Egypt. President Obama began the conversation by praising Prime Minister Erdoğan, stating; "You are the most significant figure in the region, I need to hear your opinions."
Obama also went on to state that Erdoğan's speech delivered to Turkey's Grand National Assembly resulted in positively effecting developments in Egypt, as he specifically stated; "Your statements contribute greatly to Egypt."
During addresses made on February 1st and 8th, Erdoğan had called on the overthrown Egyptian President Hosni Mubarak to "heed the demands of his people," and went on to state the following:
"No government can remain in power against or despite the public; the duty of a government is to listen to the calls of the public. The transition to a new government appropriate to universal democratic standards needs to be conducted through an independent and fair election, which should be organized under the supervision of international watchdogs. The election process needs to begin immediately and be short-lasting."
During Erdoğan's Assembly speech, he called on donors to hold a conference in order to prevent suffering in Egypt such as starvation in Egypt. Prime Minister Erdoğan reiterated his opinion that the transition process needs to be swift during his telephone conversation with U.S. President Obama. Stating, "The democracy process needs to be put back on the rails as soon as possible," Erdoğan also went on to explain that an international conference needs to be held in order to economically assist the Egyptian public.
Obama responded by expressing that he was also well-aware of the economic difficulties in Egypt and stated, "Let's put forth effort to establish a conference." Meanwhile, all three conversations held between Erdoğan and Obama during the crisis in Egypt, were initiated by Obama and were held on January 29th, February 5th and February 12th.
Message for Mawlid an-Nabi
Prime Minister Erdoğan delivered a message to commemorate the Mawlid an-Nabi, the anniversary of the birth date of the Prophet. "With the birth of our beloved Prophet, an era of illumination was begun for humanity. In this era we are in now, we need his advice and teachings more than ever. In one aspect, we should consider this holiday as a significant opportunity to head the words of our Beloved Prophet and the messages he delivered to all of humanity. I want to congratulate all of the Islamic community and our citizens on this day of Mawlid an-Nabi."