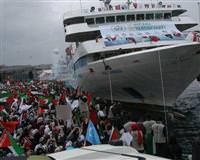 Turkey will insist on an apology from Israel for its bloody raid on a Gaza-bound Turkish aid ship as a condition for mending ties, regardless of the findings of a U.N. investigation, a Turkish diplomatic official said.

"We expect the U.N. investigation to be balanced so we won't get what we want and Israel won't get what it wants, but apology and compensation are a red line for us," the official told a group of reporters in Ankara on condition of anonymity.

Turkey, a predominantly Muslim former ally of the Jewish state, has scaled back ties, demanding Israel apologise and pay damages for the raid, which caused an international outcry.

Nine Turks were shot dead in the May 31 clash when Israeli marines stormed a flotilla organised by a Turkish Islamist charity, which ignored orders to turn back as it tried to breach an Israeli blockade of the Gaza Strip.

"We will not back off on our demands. We cannot forget the loss of nine lives. Israel is our friend. If a friend is in error, then he or she should apologise."

Israel has broached the issue of compensation but has not admitted it was at fault. The official said findings of an investigation set up by U.N. Secretary General Ban Ki-moon are expected in April, adding: "We hope Israel will use it to make amends with us."

Israel and Turkey have come to contradictory conclusions on the methods used to intercept the flotilla.

Israel's Turkel Commission, whose report will form the core of Israel's submission to the U.N. investigation, cleared the Israeli government and military of wrongdoing and said the operation was legal and justified overall.

The commission accused flotilla organisers "of planned and extremely violent" resistance "directly connected to the ongoing international armed conflict between Israel and Hamas".

Ankara, in its own report, accused Israel of violating international law and said Israeli soldiers used "excessive, indiscriminate and disproportionate force" against civilians on board. It said two of the activists killed on the vessel were shot from a military helicopter.