The ‘Godfather’ of customs caught 41 times on camera 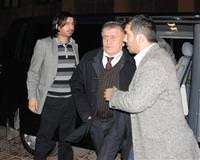 A scene reminiscent of the film Godfather; a cargo boss, nicknamed the ‘Godfather’, would have people kiss his hand as they placed envelopes stuffed with bribes into his pocket.

SABAH has acquired further details into the operation into bribery conducted by customs officials. Footage from cameras placed in the Atatürk Airport Cargo Custom Manager Hayrettin Eker's office reveals all of the dirty mechanisms that were in place.
"Holiday Gift"
Referred to as "Godfather" by company representatives, Eker was recorded receiving a total of 41 bribes on camera. The footage shows Eker having his hand kissed as envelopes with bribes were being placed in his pocket. Eker would say, "May God bless you, a holiday gift…" as he received the money.
WARNED TO 'BE CAREFUL'
According to records, right before the operation, Istanbul Customs Department chief Lütfi Ekinci warned Eker to be careful and supposedly stated, "everyone needs to clean up their act." There are 46 suspects in the bribery probe; Hayrettin Eker is amongst the 16 that have been arrested.
A report prepared by the Istanbul Department of Finance, reveals all of the dirty details of the circle of bribes and corruption that was transpiring. Upon receiving a tip, Department of Finance Police initiated an investigation into bribery and corruption by customs officials. Using the latest technology, they managed to track down the suspects in action.
One of the prime suspects in the investigation was AHL Cargo Customs Manager Hayrettin Eker. With a court ruling, police used a very special method to plant a secret camera in Eker's office on November 14th, 2010. From this day on until January 7th, 2011, the camera recorded everything that transpired in the office. It was only turned off only on a number of days due to malfunction or holidays.
'MANIFESTO OF INTEGRITY'
According to the report, although Hayrettin Eker had hung a 'Manifesto of Integrity' on the wall of the corridor to his office, and would state that he, "would stand up against bribers," it turns out Eker would do no such thing when it came to meetings in his office. Within three months time, the secret camera recorded a total of 41 accounts of Eker receiving bribes. Footage also depicted a series of interesting rituals which took place as Eker was handed bribes. Eker, who was referred to as 'Godfather', would first receive envelopes filled with money, and would then have his visitors kiss his hand.