Sarko’s all French to Ankara 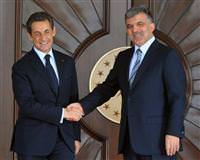 On French President Nicolas Sarkozy’s six hour visit to Ankara he received a low-profile greeting, and a cold farewell. Gül delivered a clear message: ‘Keep your promise regarding the EU.”

Paying a vast to Ankara solely as the G-20 term president, no minister was there to greet the French President. Joined by the Foreign Affairs Undersecretary, Ankara Mayor Gokcek, stated, "It was left up to me," regarding greeting Sarkozy upon his arrival.
THREE HOURS TOGETHER DURING A MEAL AT CANKAYA
President Gül, who held a lunch meeting for Sarkozy at the Çankaya Palace, stated during a press conference that he told his French counterpart that Europe should 'keep its promise' regarding EU membership. Sarkozy on the other hand delivered the message that there may be another route. Sarkozy also responded to a journalist's question by stating, "If your democracy is strong then why insist on joining the EU?"
President Gul requested Sarkozy not create 'artificial obstacles' to Turkey's EU membership, while Sarkozy persisted in drawing red lines.
Paying his first visit in 19 years to Turkey as the G-20 Term President, French President Nicolas Sarkozy reiterated his stance against Turkey's EU membership and repeated the existence of what he calls, 'red lines.' Gül told Sarkozy, who claimed that he is well familiar with Turkey and Turks, 'do not create artificial obstacles to our accession."
Sarkozy responded by stating that there are other routes than membership and stated, "we should talk instead of heading into a dead end.' After Prime Minister Tayyip Erdoğan stated that this trip was not complimentary of Turkey and France's relations. President Abdullah Gül reminded of the over 500 years of history between the two publics. Accepting Gül's official invitation to pay a visit, Sarkozy talked about how much he enjoyed Istanbul and of returning again in 2011.
After meeting with President Gül, Sarkozy paid a visit to the Ataturk Mausoleum and later met with Prime Minister Erdoğan. Sarkozy qualified the issue of 'EU membership' in which both nations are in disagreement as an 'inevitable issue' and stated, "We are trying to understand the red lines on both sides and to find a path for the future. We need to find a way that will not cause Europe instability nor demean the Turkish public, or disrupt modernization."
Due to Sarkozy choosing to spend just six hours instead of the one-day visit Turkey hoped for, Ankara decided to exercise the principle of reciprocity. Sarkozy was greeted at the airport by the Ministry of Foreign Affairs Undersecretary and the Mayor of Ankara. Sarkozy's vehicles were not permitted access to the aprons. Because it was a working visit, French flags were not put up for display on the streets of Ankara.

"I PLACE IMPORTANCE ON TURKEY"
During his one on one meeting with Sarkozy, President Gül told Sarkozy not "to play with Turkey's national pride." During a press meeting, Gül stated, "Full membership negotiations with Turkey began in 2005. This is Turkey's state strategy. We expect for the EU to keep their promises and to stand behind what they said and for us to be allowed to successfully complete the accession process. I told him that this is one of the most sensitive subjects for the Turkish public, and our expectation for the accession process is to not be disrupted by artificial obstacles."
French President Sarkozy stated that he places much importance on Turkey and that as the G-20 term chair; he would like the April conference to be held in Turkey. Expressing that he understands Turkey's distress, Sarkozy states, "I also think about the suffering and the innocent victims."
Upon a reminder that the EU has remained silent in the face of recent uprisings in the Middle East, Sarkozy stated the following; "Why then do you want to be a member of the EU? Today I am in a country where loving the country and citizenship, national pride and allegiance matters. No Turk would ever accept an outsider deciding for their own country or determining their future. The truth is the Turks resemble the French. I know Turks well."