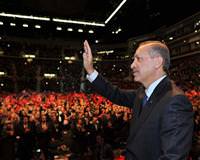 During an address at the Turkish-German Economy Congress, Erdoğan delivered a very clear message to the members of the European Union. Stating that if they do not want Turkey to join, “we will accept that… However,” states Erdoğan, “Do not stall us, don’t tire yourselves and don’t tire us in the meanwhile.”

Speaking during the Turkish-German Economic Congress organized by the Turkish Germen Chamber of Commerce at the CeBIT Congress Center, Prime Minister Tayyip Erdoğan offered up harsh criticism of the strict visa regulations in place for Turkish nationals.

"You waive visa regulations for countries such as Brazil, Paraguay, Uruguay and Bolivia, nations that are not only excluded from the European Union, but also have no commonalities with EU nations, yet for Turkey, a country that has been within the EU for 50 years, has a Customs Union and is currently engaged in accession negotiations, you still prohibit the Schengen Visa. How can we explain this?"
"Other thoughts then come to mind. This must mean that the EU is not an alliance of civilizations but is instead aiming to become a Christian union."
"I have no secret agenda and I speak openly. If they come and just say to us, 'We do not want Turkey,' then we will accept that, fine… However do not stall us, don't tire yourselves and don't tire us. Let's not waste each others' time and when we come together, let's uphold our word."
An invitation for migrants to 'return home'
Meanwhile during an address for the opening of the CeBIT Fair in Düseldorf, Erdoğan called on a number of exiled intellectuals, such as Şivan Perver and Kemal Burkay, telling them that Turkey invited those forced to migrate to Europe due to limitations of freedom of expression, to return home. Telling them the door is open all the way for those forced to leave their nation due to restrictions, Erdoğan asked for them to return and to contribute to the change Turkey is now undergoing.