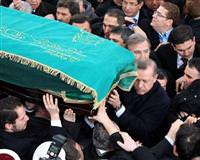 Prime Minister Tayyip Erdogan and President Abdullah Gul, proteges of Erbakan, led mourners in funeral prayers in front of the coffin, draped in green cloth adorned with Koranic verses and laid out in a courtyard of the 15th Century Fatih Mosque.

Tens of thousands of people later followed the white hearse as it bore the coffin through the streets of Istanbul's deeply conservative Fatih neighborhood to a nearby cemetery. Some media estimated the size of the throng in the hundreds of thousands.

"Erbakan was a genius," said 17-year-old student Talha Celik as he tied a green ribbon with a Koranic inscription round his head. "Though they had their differences, Erdogan followed in his path."

Erbakan, who died of heart failure in an Ankara hospital aged 85, pioneered Islamist politics in predominantly Muslim but institutionally secular Turkey and paved the way for the subsequent success of Erdogan's ruling conservative AK Party.

Erdogan's party, embracing pro-market policies and reforms designed to secure European Union membership, has gone on to dominate Turkish politics for the last decade, whereas Erbakan's party, staying close to his Islamist roots, had limited support.

Erbakan reached the pinnacle of his success in 1996 when he became the first Islamist prime minister in Turkey's modern history at the helm of a coalition government.

After a stormy year in government the military forced him to resign, angry at what they saw as attempts to undermine the country's secular order and forge alliances in the Muslim world.

"The old regime did not tolerate him and closed his party. But he opened the way for the new generation," said Ali Sever, a 76-year-old man wearing a skullcap as he stood among mourners.

As military officers, including General Hayri Kivrikoglu, commander of the prestigious First Army, joined the congregation inside the mosque, members of Erbakan's party said prayers.

The ban on Erbakan opened the way for Erdogan to rise to the top of a new, more disciplined party that avoided much of Welfare's more radical rhetoric.

Remaining active in politics to the end, Erbakan was re-elected head of the Islamist Saadet, or Felicity, Party last October after a power struggle within the party. The AK Party, which first came to power with a landslide victory in 2002, is expected to win its third successive term in office at a parliamentary election in June.