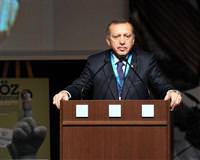 Opinion polls show Turkish Prime Minister Tayyip Erdogan poised to win a third consecutive term of single-party rule in an election to be held on June 12.

Since his AK Party was first elected by a landslide in 2002, Erdogan has introduced sweeping political and economic reforms that have brought Turkey closer to the European Union and turned it into one of the world's fastest growing economies. But he has also boosted ties with Iran and other Muslim countries.

Erdogan says that if he wins again he will introduce a new constitution to replace the charter drafted after a 1980 coup.

Following are some of the key risks to watch.

Opinion polls taken in January showed Erdogan's Justice and Development Party, known as the AK Party, getting close to the 47 pct of the vote it scored for an outright win in the 2007 election. Trends could shift once campaigning hots up.

AN ECONOMY THAT COULD OVERHEAT

The economy is expected to grow 5 percent this year but a soaring current account deficit poses a threat to stability.

A sharp rise in oil prices in the wake of unrest across the Middle East has added to the danger posed by external deficits.

In December and January, the Central Bank cut interest rates and raised banks' reserve requirements in a bid to curb inflows of hot money, weaken the lira and cool rapid credit growth.

Having achieved two out of three, there are still concerns over credit growth and whether the monetary stance is tight enough.

Any abrupt moves to rein in the economy could cost votes. Delaying action might be risky too. Turkey unveiled an ambitious mid-term economic programme last October which cuts the budget deficit and debt ratios.

- Any sharp increase in current account and trade deficits

- Signs of loose spending and other forms of state largesse

A court detained a top former general last month who is among nearly 200 serving and retired officers being tried over the alleged "Operation Sledgehammer" plot to destabilise the government in 2003. The next hearing is set for mid-March.

The case reflects mistrust between a secular officer corps and a ruling party that critics say has Islamist leanings.

WORRIES ON PRESS FREEDOM AND LIFESTYLE

Critics say that after defanging the army and the judiciary the government intends to tame critical media. They point to the thousands of journalists either imprisoned or under investigation -- many of them targeted because of their reporting on various alleged coup plots.

A recent tightening of regulations on alcohol consumption, along with lifting bans on the use of the Muslim headscarf in university, have prompted accusations that the AK Party wants to let Islamic values spread. Less pious Turks fear their lifestyles are under threat.

- Plans to rewrite the constitution after the election.

Turkey's European Union entry bid remains stalled, due to disputes over Cyprus. Frustration among Turkish leaders at the slow pace of accession talks is mounting - reservations by heavyweights Germany and France about granting Turkey full membership are obstacles.

Investors do not appear to be concerned as long as the government proceeds with EU-inspired reforms, but a full breakdown in negotiations on membership could precipitate a reassessment.

- Erdogan's trip to Brussels this week

- Any signs of progress on Cyprus

In recent years, some analysts have argued that Turkey was turning away from its traditional western facing foreign policy as the AK government sought closer diplomatic and business ties with the Middle East. Revolts across the Arab world will test that strategy.

Turkey's independent approach to the region has put the NATO ally out of step with the United States on some key foreign policy issues, notably on Iran.

Turkey has close financial and trade ties with its neighbour and faces difficulty balancing interests as the West seeks to isolate Iran over its nuclear programme. The breakdown of Turkey's past friendship with Israel has also changed dynamics.

What to watch: - Dissonance between Washington and Ankara over Iran