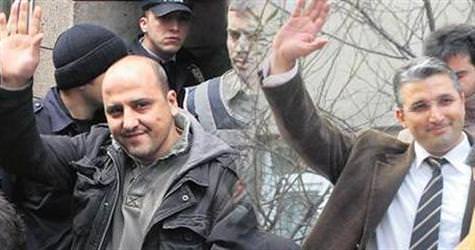 Turkish police detained 10 journalists and writers after searching their homes on Thursday, widening a three-year-old investigation into an alleged plot to overthrow the government.

The Turkish Journalists's; Association said the journalist detentions were a threat to press freedom and created a climate of fear in the European Union candidate country.

An arrest warrant was also issued for an 11th man, a former intelligence officer, whose house was among those searched in Ankara and Istanbul, but he could not be detained as he was abroad, the state-run Anatolian news agency said.

Police carried out the dawn raids two weeks after three other journalists were jailed pending trial on charges of links to a shadowy ultra-nationalist group known as Ergenekon, alleged to have plotted to overthrow the government in 2003.

Hundreds of people, from military officers to academics and politicians are being tried over a series of alleged plots in cases which reflect deep suspicion between the secular establishment and Prime Minister Tayyip Erdogan's AK Party.

Critics say the party has Islamist leanings and see the Ergenekon investigations as targeting opponents of the government, but Erdogan told reporters on Thursday evening the detentions had nothing to do with the government.

"Naturally we have no authority to interfere in this. I will only say this: my wish is that the process will reach a conclusion soon," he said.

Police detained 19 people who staged a protest against the detentions in front of an AK Party building in Ankara on Thursday evening, Anatolian reported.

The detention of journalists caused a diplomatic row last month between Turkish officials and the new U.S. ambassador in Ankara over concern about press freedom.

"The detention of every dissident journalist on the allegation of 'membership of the Ergenekon terrorist group'... creates a climate of fear in the country," the association said.

"2010 was a dark year for journalists in terms of press freedom. We have already seen signs that 2011 will be worse".

After the first arrests in the Ergenekon case in 2007, public opinion was behind the government but scepticism has grown as the investigation has widened and many suspects have been held on remand for more than two years.

One of those arrested, Ahmet Şık is already on trial over a book he co-wrote about the Ergenekon group. Another of the detained journalists, Nedim Sener, has written books about the investigation into the killing of Turkish-Armenian journalist Hrant Dink in 2007.

"If journalists's houses are searched early in the morning without a concrete reason, it shows that democracy in Turkey needs to be questioned," Kilicdaroglu told reporters.

The AK Party is expected to win a third consecutive term in office in a parliamentary election in June.

Turkey, a NATO member, has pushed through a series of political reforms with the aim of securing European Union membership but rights groups remain critical of its record on freedom of expression.