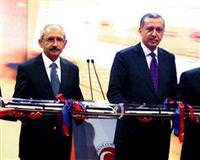 FROM ALSANCAK TO KARSIYAKA
The opening for the Aliağa-Menderes Suburban line, which will connect Izmir's southern and northern regions with 32 stops, was conducted by Prime Minister Erdoğan and CHP leader Kemal Kılıçdaroğlu, who cut the ribbon together.
The two leaders shook hands prior to the opening and then went on to travel side by side in the conductor's seat from Alsancak to Karsiyaka.
THERE WAS NO FACTIONALIZING
Stating that Izmir deserves to become a brand city, Erdoğan said; "We are continuing the investments we have done in Istanbul in Antalya, Tunceli as well as Izmir. Kılıçdaroğlu stated; "Izmir is a metropolis with the least inexpensive and most comfortable transportation.
Coming together for the first time at this ceremony, Prime Minister Erdoğan and CHP leader Kılıçdaroğlu first shook hands and then later refrained from meeting eye to eye.
The light rail line, which was realized by the Ministry of Transportation in conjunction with the Izmir Metropolitan Municipality, is 80 kilometers' long with 32 stops. The suburban rail system was an approximately 1.200 billion liras investment.