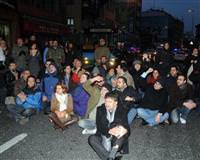 Journalists Nedim Şener and Ahmet Şık were questioned for 14 hours while five others including Prof. Dr. Küçük and Doğan Yurdakul underwent six hours of questioning leading to seven arrests in connection to the Ergenekon case.

Journalists Nedim Şener and were arrested yesterday morning under allegations of being 'members of the Ergenekon terrorist organization.' Prof. Dr. Yalçın Küçük, Müesser Yıldız, Doğan Yurdakul, Suat Çakır and Coşkun Musluk were issued arrest warrants at approximately 01:00 in the morning. Also in custody were journalist İklim Bayraktar and police officer Aydın Bıyıklı, however they were released after being questioned by the public prosecutor

QUESTIONING CAME TO AN END AT 05:30
Brought to the Istanbul Courthouse in Beşiktaş the day prior at 15:50, Nedim Şener and Ahmet Şık were subjected to 14 hours of questioning before being taken to the Metris Penitentiary. Şener provided a five hour testimony to Special Authority Public Prosecutor Zekeriya Öz, while Şık's lasted two hours. At 23:00, they were transferred to the courthouse on duty. Şık's questioning took place until 5:35 am. Following a short break, at 5:50 it was announced that a warrant had been issued for their arrest. At 6:20, Şener and Şık were taken to the Metris Penitentiary. It was at this point that approximately 30 journalists that had been waiting outside of the courthouse began to chant, "We are honored by Nedim and Ahmet. Ahmet will get out and write again, Nedim will get out and will write out of spite. The free press cannot be silenced. We are all Ahmet and we are all Nedim."
KÜÇÜK AND YURDAKUL ARE ALSO AT METRIS
Prof. Dr. Yalçın Küçük, 'Odatv' writers Doğan Yurdakul, Müesser Yıldız, Suat Çakır and Coşkun Musluk were brought to the Istanbul Court in Beşiktaş at 10:30 yesterday morning where they were subsequently transferred to the 10th High Criminal Court on duty for warrants to be issued for their arrest. The court hearing began at 19:00 and went on for approximately six hours. The arrest warrants were released at 1:00. Küçük, who was taken to the Metris Penitentiary, was arrested for being an 'Ergenekon terrorist organization leader,' while the remaining suspects are being tried as 'suspects.' Meanwhile, Oda TV Ankara Representative Mümtaz İdil is being treated in intensive care. According to his wife Aysun İdil, he was taken to the hospital for bleeding.
.