A day of freedom and solidarity 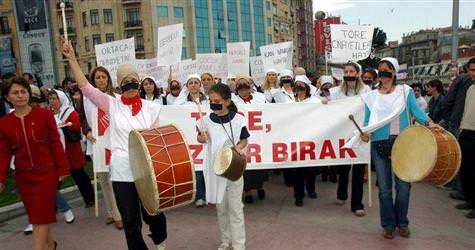 Turkey’s political parties also showed their presence for International Women’s Day celebrations in Taksim Square. The message emphasized was that it is unacceptable for women to be subjected to violence.

Istanbul's Taksim Square hosted a number of gatherings in honor of March 8th, International Women's Day.
Women from the Justice and Development, or AK Party, the Republican People's Party, or CHP, the Nationalist Movement Party, or MHP, and the Democratic Left Party, or DSP, in turn gathered in front of the historical Galatasaray Lycee located on Istiklal Street and then marched to Taksim Square.
The AK Party Women's Branch was first with approximately 100 members gathering on İstiklal Caddesi carrying placards as they marched. During a press announcement made at Taksim Square by AK Party Women's Branch District Vice Chairman Zümbül Odaman Taşkın, it was emphasized that despite all of the affirmative efforts in place women are still subjected to all forms of violence and discrimination which shows that Turkey still has a long way to go in terms of women's rights.
State Minister Hayati Yazıcı's wife Selma Yazıcı, who also joined in the march to offer her support to the AK Party women stated, "The men who are responsible for violent acts against women should be punished in the exact same manner and need to be killed. It is unacceptable for men who take on additional spouses to be advertised by the press."
After the AK Party marched, 100 members of the women's branch of MHP, joined by Istanbul Deputy and Assembly Vice Chairman Meral Akşener distributed carnations as they marched from Galatasaray to Taksim Square. The women from MHP also laid carnations on a stand opened up by AK Party in the square.
Following these two marches was CHP's march, also to Taksim Square. Istanbul District' Women's Branch Chairman Fevziye Pehlivan made an announcement in which she emphasized that March 8th, represented women's freedom, equality and solidarity. Pehlivan went on to state, "After eight years with the political party in power, the AK Party's approach, bereft of sincerity and good intentions, in terms of male and female relations we are now placed at the bottom throughout the world and have become a country that is falling even farther behind each year."
Later in the day, women members from the Democratic Left Party and the Istanbul Bar Directorate Women's Right's Center also held a demonstration.
MASSACRE-LIKE MURDERS
Approximately 30 female members of the Istanbul Feminist Collective gathered in front of the Kadıköy Courthouse for a march, holding up photographs of women killed and signs with their names that read, "Women are killed by the men they are closest to. What are you waiting for to put an end to this massacre?"
MARCH 8TH DEMONSTRATION IN THE CAPITAL
In Ankara, a number of women's foundations gathered for a collective demonstration on International Women's Day. The demonstrators, which marched to Kızılay, were a colorful site, including some women who chose to wear bridal gowns.