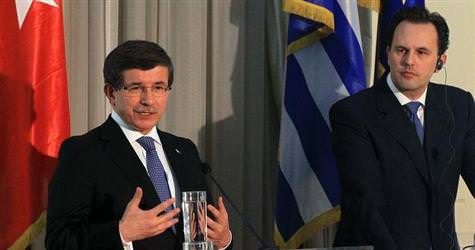 Greece urged Turkey on Tuesday to quickly implement an EU deal obliging Ankara to take back illegal migrants who have crossed its territory before reaching Greece.

Amid fears that unrest in Libya and North Africa may prompt more migrants to try to reach the European Union, Athens and Ankara discussed ways to improve their cooperation on a problem that has strained their relation for years.
Nearly nine out of 10 immigrants caught crossing illegally into the EU use Greece as a gateway, most of them via the land border with Turkey. Athens says it cannot cope with the increasing numbers.
EU and Turkish officials concluded talks on a readmission deal in January, but Turkey has said it wants the bloc to task the European Commission with starting talks on liberalising the visa regime between Turkey and the EU.
"The completion of the negotiations on the readmission agreement between Turkey and the EU was a significant step in the right direction," Greek Foreign Minister Dimitris Droutsas said after talks with his Turkish counterpart Ahmet Davutoglu.
"We welcome it and I hope that this agreement will be soon implemented," he told reporters, adding that he backed visa talks.
EU diplomats have said it was unlikely that the bloc's governments would give the green light to talks on visa liberalisation for Turkish citizens any time soon.
"I have told Mr Minister (Droutsas) our deep disappointment about the visa applications ... We want everyone to travel freely between Turkey and Greece and between Turkey and EU countries and get to know each other better," Davutoglu told the same news conference.
Last Update: Mar 09, 2011 11:14 am
RELATED TOPICS