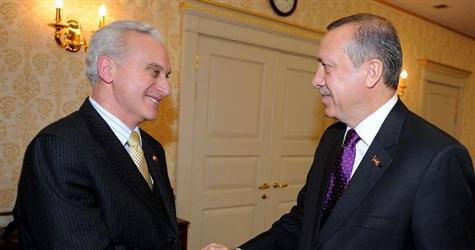 The courtesy visit took place in the Prime Ministry Headquarters and lasted for an hour and a half. After the meeting, Ricciardone announced to the press, "We had a sincere and quite friendly meeting. We discussed everything and we are on the same page."
Faced with harsh criticism from Erdoğan due to his statements regarding recent arrests in the Ergenekon and Balyoz cases, Ricciardone stated that he did not discuss the cases; however he did take notes on Erdoğan's comments regarding freedom of the press. Ricciardone took out a sheet of paper form his pocket to prove it.
Regarding Erdoğan's words, Ricciardone stated, "the issue of freedom of expression and freedom of the press is so important that I wrote something down that the Prime Minister said.'There is no democracy in a country that does not exercise freedom of the press.' We are in complete agreement on this issue. This is a very important principle for all of us."
According to the information obtained, during the meeting, the recent developments in Egypt, Tunisia and Libya were discussed. Erdoğan expressed to Ricciardone that they were against external forces in Libya and added; "What is important for Turkey is what the Libyans believe and want."
Ricciardone stated that the United States was not adopting the stance of interference in Libya. We have no such plan, we are in agreement.'