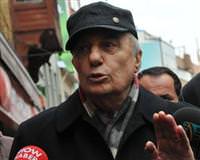 A retired Turkish general accused of leading an alleged plot by nearly 200 military officers to overthrow the government denounced the case in court on Monday as a slur on the armed forces based on fake evidence.

General Cetin Dogan, former head of the prestigious First Army and prime suspect, launched his defence in words that could revive tension between the military and the government just three months before a general election.

The trial is one of several continuing cases involving accusations of conspiracy against the government and reflects the deep mistrust between a secularist establishment led by the armed forces and a ruling party which critics suspect of having a secret Islamist agenda.

"The trial being held here is aimed to make Mustafa Kemal's (Ataturk) soldiers ... who have dedicated their lives to their country, atone for their allegiance to the Republic and its principles," he told a court at Silivri, a town in Istanbul province.

The case resulted from a "mentality which sees everyone outside their own community as an enemy", he said at the start of an 85-page defence. "This indictment is a work of slander."

"Apart from fake digital data, does the prosecutor's office have in its hands a piece of evidence? No," state-run Anatolian news agency reported Dogan as saying.

Prosecutors accuse Dogan and his co-defendants of drawing up a plan in 2003, dubbed "Operation Sledgehammer", to sow chaos, destabilise the government and prepare the ground for a military coup against Prime Minister Tayyip Erdogan's government.

Erdogan has driven reforms in Turkey that have shifted power away from old elites made up of generals, judges and educators devoted to the secular principles instilled by Ataturk, the founder of modern Turkey.

The plot allegedly included plans to trigger conflict with Greece and bomb historic mosques. Retired commanders of the navy and air force, Admiral Ozden Ornek and General Halil Ibrahim Firtina, and other senior officers were among the 196 accused.

About three quarters of the defendants are serving officers and most were jailed last month pending trial.

The defendants, important figures in NATO's second biggest army, deny any conspiracy and say scenarios discussed at a military seminar seven years ago were just a war game exercise. Outside the court, around 200 people protested in support of the defendants.

Erdogan's AK Party is expected comfortably to win a third term in office at a parliamentary election in June.

Since first coming to power in 2002, his government has attracted praise from abroad for its success in driving strong growth in the economy and pushing through political reforms designed to earn Turkey membership of the European Union.

The EU accession process has slowed to a near halt and concern is now being expressed abroad about developments in the anti-government plot cases.

The recent jailing of journalists in connection with separate alleged coup plots has aroused concern that Turkey is becoming more authoritarian and polarised ahead of the elections.