Erdoğan: If NATO is going in, we have some conditions 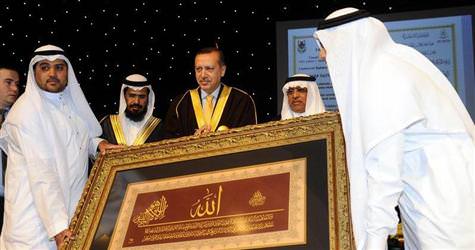 Turkey wants the international military operation against Muammar Gaddafi's forces to be concluded as soon as possible so that Libyans can settle their own future, Prime Minister Tayyip Erdoğan said on Monday.
Speaking in Mecca, on the final day of a visit to Saudi Arabia, Erdoğan said NATO member Turkey wanted several conditions to be met for the alliance to enter operations.
He warned that military intervention should avoid ending in an occupation of the North African country, rich in oil and gas.
"Our biggest desire is for this operation to be finished as soon as possible," said Erdoğan. The speech was broadcast live on Turkish television.
"Our biggest desire is for the Libyan people to determine their own future," he said, while receiving an honorary university doctorate in Islam's holiest city.
"Now the issue is NATO going into operation. If NATO is going into operation we have some conditions," Erdoğan said.
"NATO should go in with the recognition and acknowledgement that Libya belongs to the Libyans, not for the distribution of its underground resources and wealth." Several NATO nations, led by France, Britain and the United States, took part in air attacks on Libya launched on Sunday.
But NATO as an organization, which takes all decisions by consensus, has been divided on whether to take part.
"Our Libyan brothers possess every means to build a strong, stable, peaceful future. The Libyan people should be given this opportunity before the operation turns into an occupation," Erdoğan said. "The opportunity must be created for Libyans to make their own decisions."

NATO ambassadors approved an operations plan for the alliance to help enforce a U.N. arms embargo on Libya on Sunday, but were due to meet again on Monday to discuss the operation of a no-fly zone.
Alliance member Turkey, which has spoken against intervention in Libya, had earlier blocked agreement among the ambassadors, a NATO diplomat said. "There are legal procedures for the establishment of a coalition in an international operation. We take the view that for Libya, these were not sufficiently respected," Turkish Foreign Minister Ahmet Davutoğlu told reporters.
Erdoğan was due to chair a meeting in Ankara later on Monday to discuss the situation in Libya with Turkish ministers and military commanders, diplomatic sources said. Davutoğlu said Erdoğan also planned to speak with U.S. President Barack Obama.
The Turkish premier said he had spoken with Gaddafi three times during the crisis and is one of the few world leaders to keep talking with the Libyan leader, although he has called for Gaddafi to hand power to someone with greater legitimacy.
Turkey had business ties worth some $15.3 billion with Libya before the uprising against Gaddafi began a month ago, mostly in construction. In November last year, Erdoğan accepted the Muammar Gaddafi human rights award.
Signaling further discord within NATO, Turkey's Defense Minister Vecdi Gonul criticized the prominent role played by fellow-member France in the U.N.-mandated intervention.
"It seems impossible for us to understand France being so prominent in this process. We are having difficulty in understanding it being like the enforcer of United Nations' decisions," Turkey's Defense Minister Vecdi Gonul told reporters.