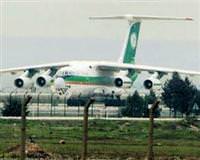 Plane was forced to land while en route from Tehran to Syria amid suspicions that it was carrying weapons or bomb-making material, according to media reports; plane allowed to return to Iran after illegal material confiscated.

Turkey has confiscated from an Iranian cargo plane material which was illegal under United Nations sanctions on Iran, a Turkish Foreign Ministry spokesman said on Tuesday.

The plane had been forced to land at Diyarbakir in southeast Turkey on Saturday night while en route from Tehran to Syria amid suspicions that it was carrying weapons or bomb-making material, according to media reports.

It was the second such incident in a week.

Turkish media reports said boxes on the plane contained rocket launchers, mortars, Kalashnikov rifles and ammunition, although there was no official statement on the cargo.

"During routine controls it was determined that there was illegal material on the plane which fell within the scope of UN sanctions imposed on Iran and this material was confiscated," the spokesman said in a statement.

"The plane was allowed to leave Turkey and return to Iran today without the illegal material," he added.

Media reports stated that seven people from the plane had been detained, but Turkish Foreign Minister Ahmet Davutoglu told reporters there had been no arrests.

Last Tuesday another plane was similarly forced to land at Diyarbakir but departed the following day after a search squad trained in chemical, biological, radioactive and nuclear cargo found nothing illegal.

Turkish media suggested the planes may have been stopped at the request of the United Nations to investigate whether they were carrying nuclear material.