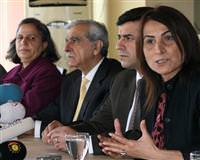 A decision that may result in escalating tension prior to the election… BDP and DTP have initiated a call for civil disobedience. The first demonstration takes place today in Diyarbakir.

Peace and Democracy Party (BDP), Chairman Selahattin Demirtaş, Democratic Society Congress (DTP) Chairman Ahmet Türk made the following announcement during a press conference held in Diyarbakir. "We have four demands we believe will lead the way towards reaching a solution to the Kurdish issue."
SIT-IN STRIKE
"We will take to the squares until the government takes a step to grant these demands. We will continue to demonstrate civil disobedience together with the public until we see results. We are starting the first sit-in strike in Diyarbakir."
"EVEN IF WE ARE RUN OVER…"
DTK Chairman Türk stated; "Even if they come and run us over with armored vehicles we will not retaliate with any action.
BDP's four demands are as following, "Education in the native tongue, freedom for Öcalan and all other political prisoners, a halt to operations and the lifting of the electoral threshold.
BDP CALLS FOR 'CIVIL DISOBEDIENCE'
After the recently surfaced 'stones and slaps' imagery, BDP has decided to make a call for civil disobedience. Today, BDP begins a sit-in strike in Diyarbakir to draw light to their demands for "native tongue education, the release of political prisoners, democratic autonomy and the dropping of the electoral threshold."
Inviting the Diyarbakır public to join the demonstration, Selahattin Demirtaş states; "There is no turning back until the government responds to our demands. Security in the region has been increased to the highest level due to the impending demonstration. BDP chairman Selahattin Demirtaş and co-chair Gültan Kışanak, DTK Chair Ahmet Türk and co-chair Aysel Tuğluk as well as Municipal Metropolitan Mayor Osman Baydemir held a press conference yesterday. Speaking during the meeting, Demirtaş expressed that the public was beginning to take initiative in reaching a solution to the Kurdish issue, and announced that they would be begin to stage civil disobedience actions. Demirtaş went on to state, "We will not consent to this period of deadlock continuing any longer. Let's enter the year 2012 with Turkey having embarked upon reaching a solution. We want Turkey to achieve the environment of peace and democracy with Kurds that it rightly deserves, this is the message our public has given us."
FIRST DEMONSTRATION IS TODAY
Expressing that the demonstrations will democratic and peaceful, Demirtaş stated that they are not addressing security forces and therefore they do not want to have to come against them. Demirtaş also announced that the public demonstration would begin at 12:00 today in Diyarbakır and that as BDP and DTK administrators, they would also be joining in the sit-in. Demirtaş goes on to state, "We are calling all those that have ever said 'I don't want a war' and 'I want peace' to offer support to these democratic demonstrations. There is no time frame for this. This type of call for civil disobedience will continue everywhere, until results have been reached."
DTK Chairman Ahmet Türk stated, "We are initiating civilian democratic action to discourage any further battle as well as to ensure the Kurdish public's demands are met. We are calling our public to come to the squares and we will act very sensitively. Even if we are run down by armored vehicles, we will not retaliate with action." BDP co-chair Gültan Kışanak also stated; "We will continue this resistance until our demands have been answered affirmatively."
After this announcement the Diyarbakır Police Department held an extraordinary meeting. While all police in Diyarbakır will be on duty, additional forces have been requested from surrounding districts.