Erdoğan is the ‘Voice of the Oppressed’ in Baghdad 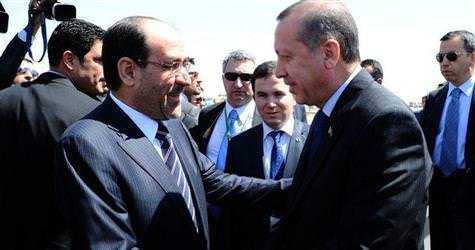 Prime Minister Erdoğan was greeted by a convoy stretching two kilometers long and a crowd reminiscent of a demonstration with signs reading ‘Recep Tayyip Erdoğan, the voice of the oppressed, welcome to Iraq.’

Conducting a historical trip to Iraq, Prime Minister Tayyip Erdoğan was greeted in Baghdad with a ceremony reminiscent of a large-scale demonstration. Greeted by Iraqi Prime Minister Nuri Al-Maliki with an official ceremony in which both nation's national anthem's ere played held at the Baghdad International Airport, Erdoğan and Maliki then moved on to a special section of the airport where they talked for awhile. Prime Minister Erdoğan was accompanied by his daughter Sümeyye Erdoğan, State Minister Zafer Çağlayan, Foreign Affairs Minister Ahmet Davutoğlu and Minister of Energy and National Resources Taner Yıldız. During a press conference which followed the Erdoğan and Maliki meeting as well as an inter committee meeting; the message was delivered of a 'strong collaboration in the struggle against terrorism. Upon departing the Baghdad Airport and arriving into the city, Erdoğan was greeted by a communal show of love by predominantly Shiite Iraqi's which created a two-kilometer-long convoy. Waving Turkish flags and holding up signs written in both Turkish and Arabic that read, 'Recep Tayyip Erdoğan, the Voice of the Oppressed, welcome to Iraq,' the crowds chanted slogans of support for Prime Minister Erdoğan. The event marked the first time ever the Iraqi public has showed this extent of love for a state leader that was not from Iraq. Prime Minister Erdoğan is also the foreign first state leader to address the Iraqi National Assembly.
'WE HAVE A SHARED HISTORY'
Prime Minister Erdoğan held his first official meeting with Prime Minister Nuri Al-Maliki in Baghdad at the Prime Ministry Building located in the Green Zone. After Erdoğan and Maliki held a one on one meeting, they both then went on to head their respective committees for yet another meeting. During both the one on one and the inter-committee meetings, the discussion was centered around the issue of preventing terrorism. Later, Maliki and Erdoğan held a joint press conference. Prime Minister Erdoğan stated that Turkey and Iraq have a shared history. Every corner of Iraq and every Iraqi individual carries the same level of importance for us. We have defended Iraq's independence, integrity of the land, unity and solidarity one every platform possible up until now. We have guarded Iraq's security and stability. We have remained at the same distance from every section of the Iraqi population."
A MESSAGE OF BROTHERHOOD
Expressing the determination to bring the struggle against terrorism in both countries to a further advanced point, Erdoğan state, "Within the framework of collaboration against terrorism, we have assessed a tripartite mechanism in order to advance cooperation. Our viewpoints on the issue coincide. The volition to further advance the struggle against terrorism is prevalent in both countries."
Erdoğan went on to state that they are also both determined to advance economic relations. Our intention to develop a 7.5 billion dollar trade volume is evidence to that extent." Expressing plans to also meet with Ayatollah Ali Sistani in Necef as well as with Massoud Barzani in Erbil, Erdoğan stated; "Our message is always the same. That is the message of collaboration, brotherhood and solidarity. It is a message geared towards Iraq's unity and integrity."
MALIKI: WE NEED COOPERATION
Iraqi Prime minister Nuri Al-Maliki also expressed the determination to extend a joint stance with Turkey against terrorism. Maliki stated, "We know that like Iraq, our neighbors Turkey are also targeted in terrorist events. The terrorism created by the PKK and Al Qaeda affects the two neighboring countries. We see cooperation as being necessary in the fight against terrorism."
Erdoğan also attended the Turkish-Iraqi Business Forum, where he made a concise address to approximately 200 businessmen including Turks conducting business in Iraq.
GUARDED BY MAROON BERETS
A high level security shield was established in Baghdad for Prime Minister Erdoğan and the accompanying Turkish committee. In addition to Iraqi security forces, Maroon Berets from the Special Forces Command also secured the surroundings. Every move Erdoğan made was tracked by the Maroon Berets.