Referendum for the presidential system 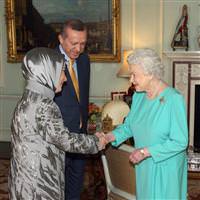 Prime Minister Erdoğan announced that the transition to a presidential system may occur through a referendum presented after the general elections in June.

Prime Minister Erdoğan made the following statements during an interview he granted Bloomberg TV yesterday while in London. "If the public responds positively to the transition to a presidential system then steps to that effect may be taken. The option to switch to a presidential system could be presented in a referendum. Presenting the option right now in a referendum is not at all an issue, however."
ASSEMBLY MATHEMATICS ARE IMPORTANT
"This is not an issue on our agenda prior to the election anyways. These are matters to be discussed following the elections…" In regards to the drafting of a new constitution, Erdoğan stated "All of our efforts are directed towards beginning launching work on the constitution immediately after the election. For this, the arithmetic of the parliament is extremely significant."
NUMBER OF MINISTERS TO DECREASE TO 20
During the interview, Erdoğan also commented on the number of cabinet ministers by stating;"We are aiming to come out with a new cabinet system. We may end up dropping the number down to 20.
Prime Minister Erdoğan expressed that the debate surrounding switching to a presidential system may arise along with the new constitution to be launched following the election by stating, "If the public wants, we may hold a referendum." Erdoğan also expressed intentions to draft a participatory constitution following the elections as well as to entirely transition state ministers to deputy ministers and also mentioned maybe bringing the number of ministers down to 20. Erdoğan provides a number of significant messages prior to the June 12th general elections regarding a change in the constitution, the presidential system and the new Cabinet of Ministers.
PRESIDENTIAL SYSTEM
(Do you support the presidential system?): This is a debatable issue. If the public reacts in favor, then it is a step we can take. As an individual, it is a democratic understanding I have put forth since I was the municipal mayor.
TAKEN TO A REFERENDUM
(Will you be presenting this in a referendum?): "We could. However, immediately taking this to a referendum is not something we are considering. It is not even on our agenda prior to the elections. These are matters to be discussed following the election.
A NEW CONSTITUTION FOLLOWING THE ELECTION
(You talk about creating a new constitution for Turkey. If you win the elections, when will you be presenting a new constitution to the assembly?) We are already embarking on exerting intensive efforts with civil society organizations to launch a new constitution. We are detailing the work being done. All of our efforts are geared towards launching a new constitution following the election. At this stage, the arithmetic of the parliament is very important. If in the parliament, we can strongly establish a constitution drafting commission in the parliament to help in launching the new constitution, then this process will transpire quicker. If we do not go this route, and instead it appears we may be taking it to a referendum then this could make things easier for us.
A PARTICIPATORY CONSTITUTION
We aim to prepare a constitution that truly represents civil freedoms and is democratic in all senses. We want to succeed in this. We want this to be a constitution drafted in the public's tongue, a constitution that is easily comprehendible. We want to present the public with a more concise constitution.
NUMBER OF MINISTERS MAY DECREASE TO 20
We also aim to come out with a new cabinet arrangement. We now have state ministers. With the exception of deputy prime ministers, we will no longer have state ministers. All state ministers will become deputy ministers. We may also drop the number of cabinet members down to 20.
HE WOULDN'T RELEASE VOTER RATES
(What percentage of the votes will you receive?): I have one characteristic and that is that I never release numbers. This is my principle. We conduct public surveys to this effect every month. It is a step for us to take to see where we are headed. We not only want to see where we stand, but we also do this to continuously assess the status of the nation's issues.
QUEEN OFFERS KIND GESTURE TO THE ERDOĞAN COUPLE
English Queen Elizabeth II made a very nice gesture to Prime Minister Tayyip Erdoğan and his wife Emine Erdoğan, by accepting them into her own personal living quarters instead of the tradition protocol area. They met for a half an hour and the Queen expressed her apprehension at the successive uprisings taking place in the Middle East and North Africa and also pointed out the importance of Turkey as a country that is both democratic and Muslim.