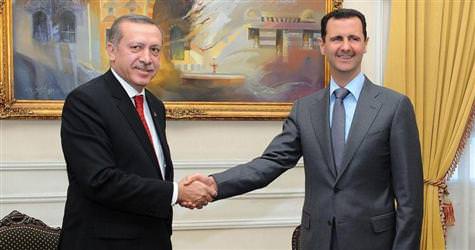 Turkey's Prime Minister Tayyip Erdogan said he would press Syria's President Bashar al-Assad to defuse unrest by making reforms sought by the Syrian people when he speaks to him on Monday, newspapers reported on Saturday.

"Beyond governmental change, there were expectations on removal of emergency rule, release of political prisoners and a new constitution," Erdogan told journalists who accompanied him on Friday on his way back from an official visit to London.

"If those expectations do not take place, we will say this to Mr Assad on Monday," Erdogan was quoted as saying.

Erdogan has spoken by telephone with Assad twice since trouble first broke out in Turkey's southeast neighbour last month.

More than 60 people have been killed in Syria since pro-democracy protests began and on Friday security forces killed at least three protesters in a Damascus suburb, as thousands participated in pro-democracy marches in several parts of Syria.

A week ago the Turkish Foreign Ministry issued a statement calling for political and economic reforms in Syria and restraint in dealing with protests.

In Assad's first public appearance since demonstrations against his 11-year rule began, he blamed the unrest on Wednesday on a foreign conspiracy and failed to spell out reforms.

But a day later, officials said Assad had ordered the creation of a panel to draft anti-terrorism legislation to replace the 48-year-old emergency law used to stifle opposition and allow arbitrary arrests.

They said he also ordered an investigation into the deaths of civilians and members of the security forces during clashes in Deraa and Latakia last week, and called for another investigation into the 1962 census that resulted in some 150,000 ethnic Kurds in the eastern region of al-Hasaka being denied citizenship.

Erdogan said Turkey was watching the Syrian people's reaction to Assad's speech and actions so far.

Turkey's longest land border is with Syria. Asked whether there was a danger that Turkey could be flooded with people fleeing the unrest across the border to Turkey, Erdogan said; "I hope not. Otherwise this will create difficulties for us."

Relations between Turkey and Syria have improved markedly since Erdogan's AK Party came to power. The two countries had come close to war in the late 1990s over Syrian support for Kurdish terrorists fighting against the Turkish state.