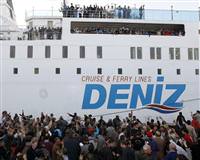 A Turkish ship rescued 250 wounded from the besieged Libyan city of Misrata on Sunday, but left behind thousands of people pleading to be evacuated, a Turkish diplomat and witnesses said.

Swathed in bandages, evacuees on board gave one of the most detailed accounts yet of conditions in Misrata, the last major rebel-held city in western Libya, and surrounded by government troops after rising up against Muammar Gaddafi in mid-February. "It is very, very bad. In my street, Gaddafi bombed us," said Ibrahim al-Aradi, 26, who had wounds in his groin.

"We have no water, no electricity. We don't have medicine. There are snipers everywhere," he told Reuters.

Others spoke of Gaddafi's forces bombing mosques and houses.

"When Gaddafi's men hear the NATO planes they hide in houses and mosques. When the planes are gone they destroy them," said Mustafa Suleiman, a 30-year-old computer engineer.

"Even the big supermarket was destroyed. Some of my friends were killed. We have no vegetables, no fruit, only bread. Gaddafi wants to kill Misrata by fighting and starvation," Suleiman said.

Guarded by heavily armed Turkish police special forces, wounded men of all ages lay on mattresses on one of the car decks of the ship, a white car ferry called the Ankara chartered by the Turkish government.

They had wounds in all parts of their bodies, and were being attended by Turkish medics.

Hamen, a Libyan doctor who was accompanying the men, said: "Misrata is terrible. I have seen terrible things. Thirty people killed in one day. These are my patients. I must stay with them but I want to go back."

Turkey's foreign minister ordered the ship into Misrata after it spent four days out at sea waiting in vain for port authorities to give permission to dock, said Ali Akin, head of consular affairs with the Turkish foreign ministry.

He said the ship had to make a hasty departure with the wounded and 100 of their relatives after a large crowd pressed forward on the dockside hoping for passage out of Libya, including 4,000 Egyptians.

"It's a very hard situation. We had to leave early."

The hospital committee in Misrata had told Turkish authorities that 120 needed to leave on the ship but far more were eventually put on board, he said.

"There is no room in the hospital so they treat some and send them back to their homes," said Akin. "This meant it was not easy to collect them."

The ferry docked in the eastern Libyan rebel stronghold of Benghazi on Sunday to pick up more wounded before heading to a port in Turkey.

As the ship arrived and blew its foghorn, several hundred rebel supporters waiting at the dockside burst into chant, crying: "The blood of martyrs is spilled for freedom" and "Muammar Gaddafi: Misrata has real men".

Ayman Mohammed, a 25-year old man with a badly burned face who was waiting on the dockside in a wheelchair to be carried onboard, said he was happy to be among the evacuees.

He said he was in his car when he was hit by a bomb in Ras Lanuf, an oil town which has seen fighting between rebel forces and troops loyal to Gaddafi. "I will come back to Benghazi. I want to kill Gaddafi," he said.

Others waited for news from their trapped families.

"My family is in Misrata ... uncles, cousins. I have had no contact," said Tihani Aktal, 30, tears streaming from her eyes.

"We don't know if they are dead or alive."

Akin, who said he was on assignment in Benghazi, added that Misrata port was still under the control of the rebels fighting forces loyal to Gaddafi.