Çeşme provides a bridge to life 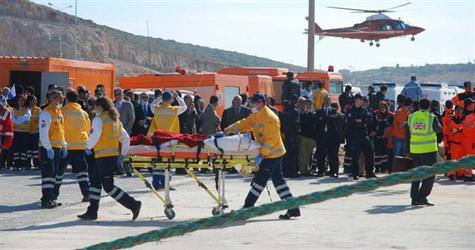 Having already expedited the return of thousands of workers from Libya now Turkey has also evacuated 479 more, including 321 wounded, from the nation which has been transformed into a battlefield.

The Ankara Ferry, which departed from Çeşme on March 27th to bring the wounded to Turkey for treatment, picked up 321 wounded and their companions from Misrata and Benghazi as well as 158 others stranded in Libya and has now docked in Çeşme.
Out of the 158 passengers that were stranded in Libya, 21 were Turks, 108 were from Libya and the remaining were nationals from a number of countries including Ukraine, Greece and Holland. The ferry boat was greeted by Minister of the Interior Osman Güneş and Minister of Health Recep Akdağ. Akdağ stated, "Turkey has practically become the number one country in terms of humanitarian services."
Tents, each one with a 24-person capacity and seven field tents were set up at the Çeşme Ulusoy Port to assist the wounded. In order to provide immediate transportation for 210 people, 169 land ambulances, completed fitted with GPS systems and three helicopters and an airplane ambulance as well as 500 medical personnel and 500 police were ready and waiting for the ships arrival. The wounded were brought on land from the boat in groups of 30. The wounded were then dispatched to various hospitals dependent on their medical condition. The stories the wounded shared truly revealed the dramatic experiences they had lived through. Cemal Swayb shared accounts of having lost three family members including a father, and explained that his 8.5 month old child had been hit by shrapnel, wounding his face and that the child's mother was also wounded because she was carrying the baby in her arms. Swayb expressed his joy at having arrived in Turkey and stated. "Now we have left the fear behind." Ahmed Rıdvan Şakir, a 40-year-old that was hit by snipers in Misrata explained that he had to leave his five children and wife behind. Explaining that Gaddafi supporters would enter homes and kill anyone who opposed them, Şakir states, "There are snipers located all over the city. They are the ones that shot me. I was separated from my children and I went them to be brought here too."