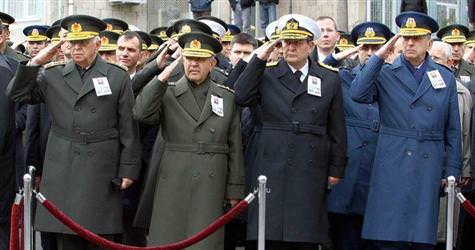 Turkey's armed forces issued a statement on Wednesday criticising, in unusually strong terms, the detention of 163 officers on trial for allegedly plotting a coup against Prime Minister Tayyip Erdogan's government.

Turkey holds a national election on June 12, and opinion polls show Erdogan's Justice and Development Party, or AK Party, is set to score a third consecutive victory. The military's comments are likely to revive tensions ahead of it.

The "Sledgehammer" case, based on a coup plot allegedly hatched at an army seminar in 2003, is one of several setting the secularist establishment against a ruling party which critics suspect of having a secret Islamist agenda.

The military pushed an Islamist-led government from power in 1997 and has staged three coups since 1960. However, its extensive powers have been curbed under EU-inspired reforms and further military intervention is regarded as highly unlikely.

"The Turkish Armed Forces is having difficulty in understanding the continued detention of the 163 serving and retired personnel," the military said in a statement, adding it had refrained from actions interfering in the judicial process.

The defendants, important figures in NATO's second biggest army, deny any conspiracy and say scenarios discussed at a military seminar seven years ago were just a war game exercise.

"The Turkish Armed Forces has repeatedly made statements... explaining in a way that can leave no doubt what the seminar was, how it was done, what it encompassed and who took part under what orders," it added.

Its comments followed a court decision on Tuesday to reject a second appeal against the detention of the officers.

Retired General Cetin Dogan, former head of the prestigious First Army and No. 1 suspect on the indictment, is among 196 officers charged in the case. He said in court last month the case was a slur on the armed forces based on fake evidence.

The plot allegedly included plans to trigger conflict with Greece and bomb historic mosques. Retired commanders of the navy and air force, Admiral Ozden Ornek and General Halil Ibrahim Firtina, and other senior officers were among the accused.