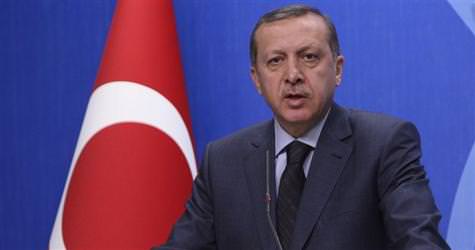 Prime Minister Erdoğan has released his three-stage plan to being an end to conflict in Libya: Ceasefire, Gaddafi lifting the blockade, and the beginning of the transition period.

Prime Minister Tayyip Erdoğan headed an extraordinary press meeting to discuss the developments in Libya. Erdoğan pointed out that there has been dark propaganda conducted against Turkey and insinuated these were a number of powers, by stating, "we are taking notes.' Erdoğan also announced a three-stage plan to bring an end to the conflict in Libya.
Erdoğan's messages were as follows:
WE ARE NOT TAKING A WAIT AND SEE STANCE:
I must express that we witness the pain and suffering our Libyan brothers are experiencing in these difficult days with deep apprehension and sadness. While Turkey is never detached from the events transpiring in the region or throughout the world, we certainly are not unresponsive to the struggles suffered by our brothers and have put forth our sensitive stance from the very start. As a nation, Turkey has absolutely never taken on a wait and see stance. We have always tried to remain true to the principles we believe in and have not approached this situation to benefit, but instead to focus on justice and rights and have tried to display a stance of compromise and constructive dialogue between sides.
WE HAVE NO SECRET AGENDA: Our prime intention with Libya is to protect the hegemony and integrity of Libya while also establishing the necessary conditions to embark upon a transition towards constitutional democracy. While doing so, we have no secret agenda. Our only agenda is to protect Libya's unity and well-being. One drop of blood from a Libyan is more valuable then billions of dollars worth of petroleum wells.
WE CANNOT REMAIN SILENT TO BLOODSHED: No matter where you live in Libya, every single brother's life, rights and justice is more important than accounting to benefit. Rights and justice is not a kind deed, they are holy values that must be bestowed upon every human being and cannot be taken away or constricted by political accounts. Just how we will not tolerate the eradicating of the most basic rights, we will also not remain silent to bloodshed and people being killed. All of our efforts are to serve the Libyan public's well-being, and peace. As Turkey we fully support the implementation of U.N. rulings. We want the NATO operation within its framework to be conducted as effectively as possible. We are actively participating in the arms embargo and in providing humanitarian aid to the Libyans. A ceasefire followed by a political transition process geared towards constitutional democracy must be embarked upon urgently. The beginning of a political transition, satisfying the public's expectations and demands, carries much importance for Libya's future.
WE ARE TAKING NOTE OF THE FORCES' FOCUS: It is very disappointing that a number of forces, who are remaining spectators to the regions' drama and believe democracy is above Libyans, have begun a dark campaign against Turkey which is only aiming to defend rights and the law. We know which forces are behind these campaigns, we are watching closely and are taking notes. I especially want to emphasize that the notion that we intend to obstruct or constrict the NATO operation is extremely incorrect and is a lie manufactured as dark propaganda.
A MESSAGE TO GADDAFI: I want to address the Libyan administration from here: By undertaking a historical responsibility, open the way for a transition process to a democracy with a constitution, where administrators are selected by public will... If you respond to the demands of your own people as well as internationally in a positive manner, it will be of vital importance for your nation's salvation.
TURKEY'S PLAN: We are working on establishing a road map that foresees a peaceful transition period and protects Libya's unity and integrity. The main factors in this road map are as follows:
1. Immediately establishing a true ceasefire and lifting the blockade implemented in certain cities by Gaddafi forces and ensuring they withdraw from cities.
2. Safety zones must be established and continuous humanitarian aid provided with absolutely no discrimination.
3. Taking into consideration all of the Libyan public's legitimate benefits, a comprehensive period of transition to democracy must be initiated immediately. The aim of this process is to establish a democracy with a constitution in which the public selects its leaders of their own volition. We are currently forming this plan with leading members of the international community and we hope to share it with or partners to the United Nations prior to the Libya Contact Group meeting to be held in Qatar, the European Union, the African Union, the Arab League as well as the Islamic Conference Organization.