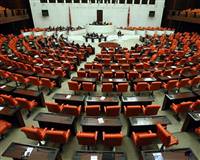 Party candidate lists for the upcoming June 12th election, were released yesterday. While half of the Justice and Development Party, or AKP, deputies were not included, with the exception of Kavaf and Aydin, all ministers were included in the list. When it comes to the party's heavy guns, only their locations were switched around.
NO OLD NAMES IN CHP
For the AKP, the success in local elections and the referendum were influential factors while preparing the party's candidate list. For the Republican People's Party, or CHP, however there was a clear-out of the 'old team'. With the exception of Baykal, all other former administrators have been eliminated from the upcoming election.
26 DEPUTIES ERASED FROM MHP
While in CHP, 64 current deputies were not included in the party's candidate list, 11 were designated locations they are not projected to win. For the Nationalist Movement Party, or MHP, out of 72 deputies, 26 were left off the list, while the number of rightist names and a number of returning and previously resentful figures have also drawn attention.
SURPRISE CANDIDATES
AK PARTY
KÖKSAL TOPTAN
Former Speaker of the Parliament had packed his bags.
VECDİ GÖNÜL
According to the lobbies, he was not going to be considered as a candidate.
CHP
ŞAFAK PAVEY
Ayşe Önal's daughter is a candidate from Istanbul.
TURHAN TAYAN
The former DYP Minister is a candidate from Bursa.

CHP
ÖNDER SAV
Former second-hand man Sav is not a candidate this round.
KEMAL ANADOL
CHP Group Deputy Chairman is not on the list.