A second ‘one minute’ outburst 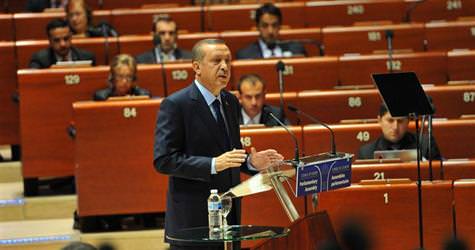 Addressing parliamentarians at the Parliamentary Assembly of the Council of Europe, or PACE, Erdoğan responded to a question by French female member Marland-Militello regarding the form of worship by minorities, by stating, “Is our friend French? You are very French for Turkey.”

Addressing the Parliamentary Assembly of the Council of Europe, Prime Minister Tayyip Erdoğan, delivered the message to 'not remain French to Turkey.'

When asked by French parliamentarian and Vice Chair of UMP Muriel Marland- Militello, "How do you prove that you have the right of access to religious minorities' places of worship," Erdoğan responded by stating, "Is our friend French? You are very French to Turkey. I am the insurance for religious minorities." In reference to 'being French', Erdoğan's play on words refers to a Turkish idiom, which means to be very distant and uninformed. Providing a lesson in democracy to Europe, Erdoğan stated, "The rising racism in Europe concerns us." Erdoğan's statements have been evaluated as reminiscent of a second 'One Minute' outburst. Erdoğan's call for 'One Minute' to then go on a rant against Israeli President Peres at the Davos World Economic Forum was widely discussed for a long time following the incident. "Turkey's EU membership is more vital than simply being used as a means to exploit," states Erdoğan who then went on to provide the following responses.

"The rising racism, discrimination and intolerance in Europe, not only makes the European public apprehensive but also concerns and in fact worries the public of the surrounding geography. Those who cannot erase the crusades from their deep memory cannot make promises of peace. To put pressure on basic human rights with election ambitions and for the sake of populism is the most significant wronging done to Europe.

The secularism model which we took from France has been used as a form of oppression due to mistaken practices, and has been assessed as practically consisting of a wall against democracy. Turkey has proven to the world that Islam, democracy and secularism can coexist. While Turkey is an extremely significant model for the geography, the fact that secularism is being debated again in Europe, and that it is transforming into a vehicle to restrict freedoms, is ironic.

Europe can not plug their ears against the demands for freedom and rights arising from the Middle East and North Africa. To perceive that some communities are not ready for democracy is at least as dangerous as racism. We now need to focus on the trajedies.

Throughout this geography, Turkey is able to communicate with every country and each ethnic group and those of varied beliefs, and is able to develop solutions as well as to take an active role in efforts for peace and compromise.
Turkey's EU membership will not be used as a political vehicle, and it is way too vital to be used as a means of exploitation in an election."

THE PRESS IS FREE
The recent accusations that have arose in recent weeks that there is pressure, constraint and censorship in the press, do not reflect the truth. Up until eight years ago, certain media organs operated according to orders by gangs or the mafia to release certain headlines, however now all publications are allowed to operate freely. Everyone is criticized freely. Misunderstandings are handled within a legal framework. We know that certain arrests and detainments are being perceived by Europe as being an act against freedom of the press. However, I would like to remind that in Europe, there are no newspapers or journalists that promote or are involved with those intending to overthrow the government.

There are at present, 26 journalists that have been arrested and charged. Not a single one has been arrested for anything to do with journalism. We request that news pertaining to recent developments be assessed not from obvious European outlets, but from more objective sources. I just spoke with PACE Secretary General Jagland regarding this issue. I suggested assistants be sent to our country, so they can come and see for themselves within the country. They will see the situation is not as perceived.

(Are judicial associations used to repress the freedom of the press?) Not for their writings or for their thoughts, however members of the press are engaged in legal proceedings due to their relations with a variety of criminal organizations or those perpetrating a coup. Because this has been documented by the judiciary, they are now conducting proceedings. We hope that rulings are made as soon as possible; we are also very uncomfortable with long-term detainments. We will be pleased if these rulings are made as soon as can be.

(Ahmet Şık's book was censored and he was arrested, can you explain why?) I am not the one that collected these books. In regards to this unpublished book, and in terms of the arrested press members that we say have other interests; well there must be something behind all of this that the judiciary calls for these documents to be pursued. It is a crime to use a bomb. It is also a crime to use the materials that make a bomb. If there was information that led to the materials to build a bomb, wouldn't security forces pursue that tip? They would and they would detain them.

If there is information regarding certain preparations and plans then the judiciary has made a decision, telling security forces to go to a specififc address where plans are being made and arrest those present. This book was later published on websites. Whatever it contained is there. This was not initiated by those in power but was a ruling made by the judiciary. You discuss an independent judiciary when it is convenient, then when it comes to Turkey, you don't want an indepent judicial system.

WE WILL NOT ASK YOU ABOUT OUR ELECTORAL THRESHOLD

(Why haven't you lowered the ten percent electoral threshold?) Right now, I see the Roman's are being expelled from France. Is this democracy? I also see that there is no respect for personal beliefs in France. Those judging Turkey should first take a good look at themselves. The issue of whether the electoral threshold is brought down from ten percent has nothing to do with democracy. The EU has a seven to eight percent electoral threshold. We don't want our country to endure more problems. When the time comes we will deliberate on this with our public, if they tell us to bring it down, we will. However, we are not going to be asking you.

(How do you prove that you have the right of access to religious minorities' places of worship?) I would like to invite you to Turkey. You are not following the developments in Turkey closely. You are insulting based solely on what you have heard. Is your friend French? They are French to Turkey to. You are very French to Turkey. According to the Treaty of Lausanne the election of an Orthodox Patriarch should be conducted at the St. Sinod Assembly. However we have overlooked the election and the fact that the Orthodox Patriarch right now is not a Turkish citizen, because they are our citizens. They say they want to hold a mass at the Sumela Monastery and we say 'certainly'. In Van, we spent our own money to restore and open the Armenian Orthodox Church to services. In our country, no matter how many religious minorities there are, I am their insurance when it comes to being able to worship.

EU COMMITTEE TO COME TO TURKEY

Prime Minister Tayyip Erdoğan's call for Turkey's freedom of press to be witnessed firsthand in Turkey was responded to affirmatively by the Council of Europe, which will be sending a committee to Turkey as soon as possible.