He killed with mines and died from mines 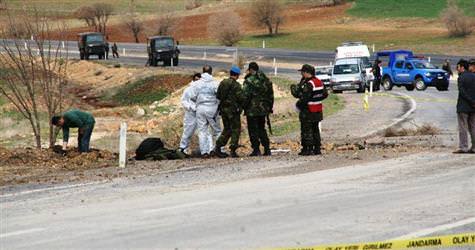 A terrorist, who died when a mine exploded as he was setting up a series of mines in Mardin, has been identified. Of Syrian heritage, Besir Muhammed was the one responsible for killing three specialist sergeants a year ago with mines set up in the same area.

When the wife of one of the sergeants killed heard the news of the terrorist's death, she stated, "I will give the good news to my husband that the traitor drowned in his own blood."
The explosion took place along the Mardin-Diyarbakır highway on April 8th. When the Gendarmerie's Special Operations teams arrived to the scene, they found the corpse of a terrorist. It was evident the terrorist had died as he was trying to rig up a series of mines along the highway. A malfunction had resulted in the mine exploding in his hand.
The terrorist, who goes by the code name, "Bengi Welat" was a 41-year-old Syrian national named Beşir Muhammed. Muhammed's bag, which was only partially destroyed in the explosion, contained notes handwritten in Kurdish, and a notebook that contained drawn up maps. Upon inspection of the notes, it was evident that Syrian Beşir Muhammed had been involve with the organization's mountain leg for 13 years and was responsible for setting up mines for the organization in the region. It has also been revealed that Beşir Muhammed was responsible for setting up the mines that killed three specialist sergeants last year in the very same region. On August 8th, 2010 a group of terrorists conducting propaganda stopped a number of cars in Mardin's Nusaybin District and Kovancılar locale. When gendarmerie teams arrived to the scene, the terrorists ran, however they had set up mines before doing so, which resulted in the deaths of specialist sergeants Zeki İnan, Tuncer Özdemir and Hacı Ahmet Efil.