Pakistan would back Taliban office in Turkey 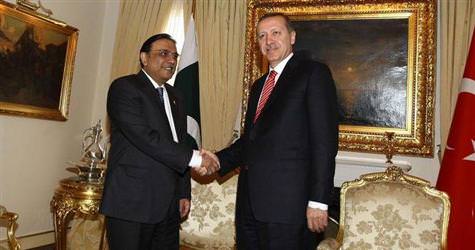 Pakistan would back a plan to allow the Taliban to open a political office in Turkey to help with talks to end the war in Afghanistan, a Pakistani official said on Thursday during a visit by Pakistan President Asif Ali Zardari to Ankara.

Muslim Turkey, which has hosted talks aimed at building trust between Pakistan and Afghanistan, has said it is open to allowing the establishment of a diplomatic presence for the Taliban on its soil, but that there is no formal request yet.

Analysts say that any solution to the Afghan conflict would likely require the support of Pakistan.

"As Pakistan we have no reservations for such an office to be opened," the official said, on condition of anonymity.

"We are not against it. As long as there's ownership from the Afghan people and the Afghan government we will not oppose it," the official told Reuters.

The proposal first surfaced during a trilateral summit in December between Turkey, Afghanistan and Pakistan in Istanbul, in which Afghan President Hamid Karzai said Kabul would welcome any offer by Turkey meant to facilitate talks with the Taliban.

Zardari, who is in Turkey for a state visit, declined to comment during a news conference on Wednesday with his Turkish counterpart Abdullah Gul when asked if there had been any progress on letting the Taliban open such an office in Turkey.

Gul, who was asked the same question, also declined to comment but said: "Our contribution to Afghanistan will always be within the context of cooperation with Afghan authorities."

A Turkish foreign ministry official, who asked not to be named, told Reuters on Thursday: "There is no application (for opening a Taliban office) yet and no decision has been taken yet. We will evaluate it when there is such a demand."

A joint statement after those talks said Afghanistan and Turkey would work "with all concerned parties in promoting the peace process in order to ensure successful outcomes."

Afghan and Pakistani intelligence agencies suspect each other of secretly encouraging militant factions to launch attacks to destabilise each other's governments in the hope of winning greater influence once Western forces leave the region.

Turkey, the largest Muslim country in NATO, has troops in non-combat roles with NATO forces in Afghanistan, and also has well established military-to-military contacts with Pakistan.

While U.S.-led NATO forces have built up troops in Afghanistan there is also a search for a political solution.

U.S. President Barack Obama has promised to begin pulling out U.S. forces in 2011, and NATO has agreed to end combat operations and hand security to the Afghans by the end of 2014.