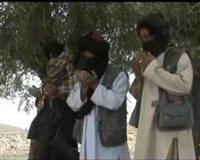 A video depicts Turks that have gone to Afghanistan to fight organizing a mortar attack on an international forces’ station, referred to on the video as ‘occupant forces’.

The video, entitled 'Mujahid attacks in Vardak' shown on a jihad website in Turkish was stated to be shot in Vardak, Afghanistan at the beginning of April. According to a description of the video, "The group, which consists of Uzbeks and Turks, staged a mortar attack on an occupant forces station." In the footage, the militants are shown using mortars.
SPEAKING TURKISH
During the 15-minute long video, the militants set off ten mortars and all pray together. According to an announcement in the video, an individual speaking Urdu states that the 'occupiers have suffered losses'. Afterwards the video relays that a number of ambulances and helicopters are transporting the wounded and killed. A Turkish militant is heard speaking in a small portion of the video. "Right now, we see American jets," states the militant who goes on, "They are probably sending these jets after us. Hallelujah the Lord has made them blind until now. Thank goodness we have not incurred harm, Praise be to God. They are just going around and around above us."