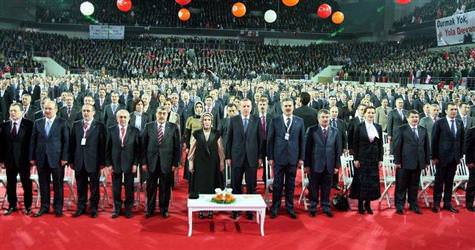 Erdoğan states; “I am asking CHP and MHP, Do you represent the will of the public, or that of Silivri?”

Speaking at a promotional meeting held in Ankara to introduce the AK Party's 550 candidates in the upcoming election, Prime Minister Tayyip Erdoğan issued harsh criticism of the opposition. "They weren't able to find candidates outside, so they had to transfer some from Silivri (penitentiary). They have decided to open up an Ergenekon contact office under the roof of their own party."
From gangs, from the mafia…
"I am calling out to CHP and MHP from here. Do you get your strength from the public, or from gangs, the mafia or dark organizations? Do you represent the people's will or that of Silivri?"
THE KURDISH ISSUE NO LONGER EXISTS
In regards to the issue of the Southeast, Erdoğan states, "This country no longer has a Kurdish issue. My Kurdish brothers have issues.
During an AK Party meeting held at the Ankara Arena Sports Center in order to introduce the 550 deputy candidates to run in the upcoming June 12th general elections, Prime Minister Tayyip Erdoğan delivered a number of messages as well as two directed at the opposition.
Asking CHP whether they represent the public or those on trial in the Ergenekon case, Erdoğan went on to criticize MHP for announcing that the projects spearheaded for the year 2023 were theirs, by stating, "They do not have such a horizon, nor the capacity."
'AK PARTY WILL NOT RETREAT'
"This cadre is a photograph of Turkey. Our list of members represents every ethnic group, each region, every belief and social group. With this list, Turkey has once again been embraced with sincerity. Some say that Turkey is retreating from certain regions (Southeast). However, those that write this are not seeing the volition put forth by the AKP for a solution.
The AK Party is not retreating from any region, nor will they. We are presenting names of those that can reach solutions just like a jeweler precisely works his jewelry to present in a display. Others are put forth ready-made. I am calling out to them: You may have not heard your name called. However, each person on the list is experienced, well-equipped, names that have a love of the land.
There is not a single person amongst these candidates that discriminates based on ethnicity, regions or beliefs and there cannot be. However, we will not refrain from stating that we are a citizen of the Republic of Turkey.
Only we are able to bring down the politics of Southeastern Anatolia that smell of exploitation. There is no longer a Kurdish issue in this country; there are only issues for my Kurdish brothers. There is also exploitation of our Kurdish brothers. While some exploit my Kurdish heritage citizens, others exploit the funerals of those killed in the line of duty; in fact they are exploiting our martyrs. We will not allow for this, we will not be one of them.

ERGENEKON OFFICE
(CHP) First they said they were the lawyers of the criminal organizations. Then they went at each other with an operation staged by the organization. If that wasn't enough, they took to the podium, and Mr. Chairman of the main opposition party states, "Where is this Ergenekon organization, I am going to become a member." It's in Silivri. If they had opened up a membership book, then you can go be a member. Those who weren't able to find the membership office for Ergenekon, have now decided to open an Ergenekon contact office under the roof of their own party.
They weren't able to find candidates from outside, they had to transfer them in from Silivri. From here I ask CHP, I ask MHP; "Do you represent the will of the people, or that of Silivri? Do you get your strength from the people or from gangs, the mafia or dark organizations? Wasn't it you that wanted immunity lifted? Please for once don't swing.
When we announced our manifesto, others stated, 'Our friend Hamzaçebi had announced the Prime Minister's two-city plan for Istanbul a long time ago.' I served as the mayor for Istanbul. I know very well what exists and where in Istanbul. Akif Hamzaçebi (CHP) should first get to know Istanbul. First he should get to know the chairman. The chairman referred to Kağıthane as Kağıttepe. Akif Hamzaçebi on November 13th, 2007 mentioned establishing two cities in the east and west of Istanbul not in Istanbul, while addressing a commission regarding the Ministry of Transportation budget. He said one of the cities should be built in Sakarya's Karasu region and the other along the Saros Shore. This project has nothing to do with ours.

FRENCH TO ISTANBUL
They don't know where Istanbul is. They are French to Istanbul. What I am talking about is creating two cities with the understanding of urbanizing the borders of Istanbul. We have already done the architectural preparations for one. The chairman states, "we have nothing to do with a crazy project, we care about serving the people." If these projects aren't serving citizens then what is it? There will be employment opportunities for tens of thousands of people.
'Turkey is ready, the goal is 2023', we say. Now, MHP's chairman comes out and says 'that concept is mine.' And I say, Mr. Chairman, are you able to make such goals for the year 2023? This public gave you five years in power. You stayed in power for three and a half of those years and then quit and ran, you left. How are you going to account for the year 2023? They do not have the vision, or the capacity."