The documents are in; the ball is now in the Higher Election Board’s court 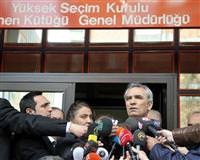 After the Higher Election Board stated that if the BDP’s independent candidates submitted certain necessary documents they would then reconsider the ban imposed on the upcoming election, yesterday the independent candidates which had been vetoed from participating in the election spent the day in document fervor.

The candidates, who have received restitution of divested rights documents from the courts, have submitted their appeal to the Higher Election Board, or YSK, to have the veto ruling annulled. The YSK will begin deliberating today.
HIGHER ELECTION BOARD SEND SIGNS OF HOPE
While information has surfaced that Sabahat Tuncel, whose jail sentence has been postponed, no longer has any restrictions blocking him, Isa Gürbüz received a rejection ruling from the courts. Higher Election Board Deputy Chairman Kırdar Özsoylu has sent out signals of hope, by stating that the applications would be deliberated on today. "My wish is for our council to reach a ruling that will pave the way for all democratic rights."
Signs of a solution for the independent candidates' crisis are beginning to get stronger. The first step occurred during the Higher Election Board's meeting yesterday in which it was ruled that independent candidates would also have the right to appeal the ban.
Once Higher Election Board Chairman Ali Em stated, "If they reapply with new documents then we will assess the situation," the intense traffic began. The banned independent candidates have since submitted their appeals to the Higher Election Board.
DİCLE AND ZANA RECEIVE SPECIAL AUTHORITY COURT RULING: Having received a ruling from the Diyarbakır 1st and 4th High Criminal Courts, that they would not be eligible for a restitution of divested rights, resulting in the election ban on Leyla Zana and Hatip Dicle, yesterday with the assistance of their attorney's both candidates applied to the Ankara Special Authority 11th High Criminal Court. This time, they received written documents stating that neither Zana nor Dicle have any rights prohibited.

KIŞANAK RECEIVES RULIGN REMINISCENT OF A LESSON: The Izmir 8th Special Authority Court and the High Criminal Court issued Gültan Kışanak a restitution of divested rights in the form of a lesson.


Reminding that the ruling on Kışanak spanned back to 1992, it was stated that the convicted individual did not have a record since 1992 and therefore must be considered as having displayed goodwill. The fact that this individual is currently a deputy means that there is no way that it could be stated otherwise. Therefore there is no need for further investigation. The individual completed their sentence 17 years ago and has not since incurred a record and furthermore has served as a deputy, therefore an investigation of goodwill is irrelevant."

"STONE THROWING CHILDREN" RULING: Sebahat Tuncel's candidacy had been vetoed due to a one year, six month prison sentence in accordance to Istanbul's 7th Criminal Court and the 2911 law on Demonstrations and Marches. Tuncel's attorney applied to the 7th Criminal Court of Instance citing the 32nd item, known as the 'Stone Throwing Children Law" and how the lower limit had been brought down to six months. The court lowered the sentence to six months.

KÜRKÇÜ AND YILDIZ ARE ALSO OKAY: Both Ertuğrul Kürkçü and the BDP supported Salih Yıldız were able to receive restitution of divested rights yesterday and submitted the documents to the Higher Election Board.

SOLE REJECTION GOES TO İSA GÜRBÜZ: İsa Gürbüz, whose candidacy for Elazığ was vetoed, applied to the Karakoçan Court of First Instance for a restitution of divested rights, however the court rejected the request stating he had committed two crimes within five years' time.