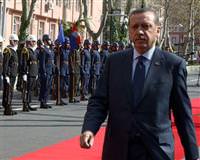 Turkish Prime Minister Tayyip Erdoğan voiced concern on Tuesday over Syria's violent crackdown on demonstrators and said he was sending an envoy to meet President Bashar al-Assad and encourage him to move toward democracy.

Erdoğan has friendly relations with Assad and has since the early days of the unrest urged him to show restraint and make reforms desired by the Syrian people, or risk the fate suffered by Arab leaders who have been toppled by uprisings this year.
Hundreds of pro-democracy protesters have been killed in Syria's revolt, and on Monday Assad sent tanks and artillery to try to crush the uprising in Deraa, the city where it started.
"I told Assad clearly our worries and anxiety because of current developments," Erdoğan said. "The current process is a disturbing process."
He said Assad's decision last Thursday to lift 48-year-old emergency laws was a good start, but he needed to do more.
Many Syrians regard the reforms announced last week as an empty gesture.
"There are more steps to be taken in Syria," Erdoğan told a joint news conference with the visiting premier of Kyrgyzstan.
"We absolutely do not expect or want an undemocratic implementation and certainly not an authoritarian, totalitarian, patronizing structure. Our desire is that ... a rapid democratization process takes place.
"Our representatives will present to him (Assad) some of our preparations."
He said the envoy might go to Damascus as soon as Thursday.
European governments urged Syria on Tuesday to end the violence. Washington said on Monday it was studying sanctions and Dutch Foreign Minister Uri Rosenthal on Tuesday proposed the European Union suspend aid to Damascus and impose an arms embargo and sanctions against its leaders.
Turkey, a predominantly Muslim member of NATO with growing influence in the Middle East, has built good relations in the last few years with Muslim neighbors such as Syria.
U.S. President Barack Obama spoke with Erdoğan on Monday about the crises in Syria and Libya.