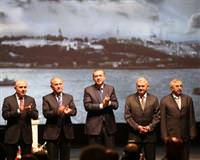 The AK Party of Prime Minister Tayyip Erdogan is on course to win a third consecutive term when Turkey votes in a parliamentary election on June 12, according to an opinion poll published on Saturday.

The survey conducted on April 13-27 by polling company Genar showed AK winning 48.7 percent of the vote, above the 46.6 percent it scored in the 2007 election.

The Genar findings are in line with a survey by pollster Metropoll published on April 25, which showed between 47-50 percent support for AK.

The polls take into account a feature of the Turkish electoral system whereby ballots cast for parties that score less than 10 percent of the vote are redistributed among the leading parties. The 10 percent threshold is meant to reduce the chance of unstable coalition governments.

The AK Party has overseen a period of unprecedented prosperity since inheriting a struggling economy after a financial crisis in 2000-2001.

Critics, however, remain suspicious about the Islamist roots of AK leaders, including Erdogan, although the party has cast itself to conform with Turkey's secular constitution and is sometimes compared with Europe's Christian Democrat parties.

The poll of 2,250 voters in 60 provinces showed support for the main opposition Republican People's Party (CHP) at 25.2 percent, while backing for the conservative Nationalist Movement Party (MHP) was 11.9 percent.

The main Kurdish group, the Peace and Democracy Party (BDP), is seen getting 6.4 percent of the vote, below the 10 percent threshold for entering parliament. But the BDP's strategy has been to bypass the threshold law by fielding candidates as independents.

Erdogan has pledged to introduce a new constitution if he wins the election to replace one written in the aftermath of a military coup in 1980.