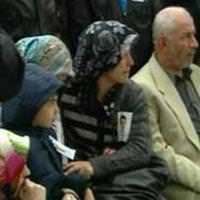 The ceremony was held today in the Kastamonu Police Department for Recep Şahin, a police officer for the Çankırı Police Department, who was providing security for Prime Minister Erdoğan when a hand grenade followed by shots were directed at his vehicle.
The attack took place yesterday, 25 kilometers into the Kastamonu-Çankırı highway and was directed at the police convoy accompanying the Prime Minister's campaign bus. Police officer Recep Şahin, who died at the age of 34 in the attack, was married and had a child.


The attack, which took place at Ilgaz Mountain, followed an opening ceremony in Kastamonu, in which Erdoğan addressed the public. Erdoğan departed by helicopter for Amasya after the meeting. Those returning to Ankara, including the Prime Ministry's security detail and party officials boarded the campaign bus. After going 20 km, the convoy was attacked at precisely 17:15 yesterday. The police car leading the convoy was the first to be hit. Due to the winding road, the vehicle was going slow when it was trapped in cross fire coming from a number of spots in the forest. One of the two police officers in the car came out wounded and began returning fire. Meanwhile, when the assailants hit the gasoline tank with a bullet, the vehicle exploded. At this point other security forces in the convoy began shooting at the area where the ambush started. After conflict ensued for awhile, the perpetrators escaped into the forest.

'THERE WERE THREE TO FIVE PEOPLE'

Recep Şahin, the driver of the vehicle attacked was killed. The other police officer in the car, Metin Kuş was wounded by a bullet that scraped by his head. Stated to be in good condition, Kuş was taken to Ankara by helicopter.

Kuş described his experience as follows: "When climbing the Ilgaz Mountain, vehicles are forced to slow down. When we turned a corner, we were hit by fire coming in from two different directions; I think there were three to five people. After being shot at, I noticed that my comrade who was in the driver's seat, Recep Şahin, was shot. He had been hit a number of times."

After news of the ambush surfaced, the area was blockaded. The roads were blocked off and the area was inspected. There were 22 shells found from the area of the attack. A significant number of police and specially trained units have been transferred to the region.