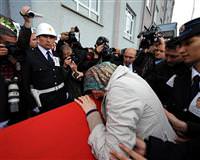 Mayor Abdullah Demirbaş's belief in a political solution to Turkey's Kurdish conflict wasn't shared by his son. He left home to fight.

With a national election a month away, there are thousands of PKK terrorists who trust Kalashnikov rifles more than a ballot box to win rights for Kurds, an ethnic group found in Iran, Iraq, Syria and Turkey.
"It is because democratic rights are not given to Kurds, because parties are closed and politicians are punished, that Kurdish youths go to the mountains," the mayor said, pointing to a photo of his teenage son on his desk.
The mayor's son is one of a new generation of recruits for the PKK, the militant movement behind an insurgency in Turkey that began in 1984 and has wiped out more than 40,000 lives and ruined countless more.
The PKK was blamed for an attack on a ruling AK Party campaign convoy on May 4 after a rally addressed by Prime Minister Tayyip Erdoğan in the Black Sea province of Kastamonu.


One police officer was killed and one wounded in the attack.

FACING 178-YEAR SENTENCE
The abiding violence is fuelled by frustration at the slow pace of reform in EU-candidate Turkey and a court case against some 150 Kurdish politicians and activists, including Demirtaş, accused of ties to the PKK terrorist organization.


Former teacher Demirbaş said some 1,500 youths, including his son, joined several thousand PKK terrorists already in the mountains of southeast Turkey and northern Iraq since the mass court case was launched two years ago.
Demirbaş is mayor in the historic heart of Diyarbakir, on the banks of the Tigris river, the largest city in Turkey's economically backward southeast where the PKK insurgency is focused.
The mayor is defending himself in some 23 court cases related to the use of Kurdish in municipal services and links to the PKK, a rebel movement designated a terrorist group by the United States and European Union.
The cases carry a maximum jail sentence of 178 years. Such legal battles are commonplace for Kurdish politicians.
Prime Minister Erdoğan launched a reform initiative to boost the rights of Turkey's estimated 15 million Kurds, but his room for manoeuvre has been constrained by nationalist anger and general bitterness over the soldiers and civilians killed.
Yet his government has pushed through cultural reforms allowing Kurdish television broadcasts and university courses, countering a decades-old policy of denying Kurdish identity and boosting the popularity of Erdoğan's party in the region.
A comment by Erdoğan at a recent election rally that there was no longer a Kurdish problem fuelled doubts among Kurds over the prime minister's commitment to reforms.
Erdoğan's AK Party is on course to win a third successive victory in the June 12 election, but its popularity in the southeast is eclipsed by the pro-Kurdish Peace and Democracy Party (BDP) which dismisses the reforms as cosmetic.
Visiting the southeast, Erdoğan spoke of fraternal unity of Turks and Kurds, while trashing the BDP over militant links.
"BDP deputies stand beside masked terror group members, next to those with petrol bombs in their hands," Erdoğan told a rally in Muş province.
PROTESTS
The BDP launched a campaign of civil disobedience in March, apparently supported by jailed PKK leader Abdullah Ocalan, held on an island prison south of Istanbul since his capture in 1999.
The campaign includes sit-down protests and Kurdish Muslim worshippers praying in the open air, refusing to pray behind state-appointed imams in mosques.
In a demonstration of support for the PKK on May 4 -- the same day as the attack on police in Kastamonu -- thousands marched in Diyarbakir in a funeral cortege for four terrorists killed in clashes the previous week.
Masked youths held aloft PKK flags and chanted pro-PKK slogans on their way to the cemetery, and riot police were pelted with petrol bombs and stones.
The BDP says its goals are to secure education in Kurdish, the lowering of a threshold which prevents the main Kurdish party from entering parliament, the release of political prisoners and an end to military operations against the PKK.
Ultimately, the BDP wants autonomy for mainly Kurdish provinces. But the central issue for the BDP is the use of Kurdish language in public life.
Kurdish officials and politicians on trial in a specially built, spacious courtroom in Diyarbakir, have made the use of their mother tongue a point of principal in a case whose outcome is seen as crucial to the region's future.
The chief judge has refused to allow defendants to make their defence in Kurdish, and the case is bogged down, with defence lawyers boycotting the latest hearing.
"The verdict in this case will be seen as showing Kurds whether they have the right to conduct politics on a democratic basis," said Diyarbakir Bar chairman Emin Aktar.