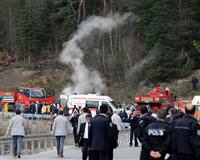 While speaking on transmitters, the PKK claimed ownership of the recent attack that took place on a police convoy in Kastamonu. Governor Bektaş verified the terrorist organization’s involvement yesterday during a press conference. Bektaş also stated that the attack was not specifically directed at Prime Minister Erdoğan.

Kastamonu Governor Erdoğan Bektaş's explanation regarding the attack on a security convoy accompanying Prime Minister Erdoğan's campaign bus points to the PKK terrorist organization's responsibility. "A five to six person terrorist group was also seen in Sinop, Çorum and Kastamonu. We know that it was the same group responsible for this attack. The fact that the ambush took place as the Prime Minister's convoy passed is simply a coincidence.
CONFESSION VIA TRANSMITTER
A conversation between members of the PKK terrorist organization held over a transmitter revealed their responsibility of the heinous attack. Meanwhile just three days prior to the attack, intelligence units had detected coded words shared via PKK members on transmitters that meant, 'Fire will burn on Ilgaz, and everyone will see."

According to Kastamonu Governor Erdoğan Bektaş, the ambush which took place the day before yesterday, resulting in the death of a police officer was conducted by the same PKK terrorist group responsible for the Boyabat attack which took place a month ago. Bektaş states that according to their assessments thus far, it is a five to six person group that has been spotted in various locations in Sinop, Çorum and Kastamonu.
Governor Bektaş went on to state the following; "We know that it was the same group that was responsible for this ambush. We also know that it appears it was an attack on the Prime Minister's convoy. However, according to our assessment, we feel that his attack was conducted without intending to target the Prime Minister's convoy nor knowing it would be passing. We were aware of this group's mobilization and their intentions. Their main objective is to have their voices heard in the region and to conduct an attack targeting police. The way the incident transpired is evident to this effect. If this had been an act with the knowledge that it was the Prime Minister's convoy, then it would have resulted in different developments, and a different scale of organization. It just happened to be that specific convoy. They were waiting in the forest for a police vehicle to pass. They just ambushed the first traffic police car they saw."