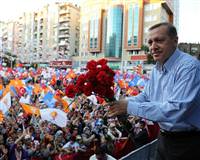 Prime Minister Erdoğan has announced that they are preparing a draft law which will enable provinces with populations surpassing 750,000 to be given metropolitan status.

Prime Minister Tayyip Erdoğan has recently announced preparations are in place on a draft law which would allow for provinces with a population surpassing 750,000 to be turned into a metropolis. According to Erdoğan, at present there are already 11 provinces that fall into this category. Addressing the public in Kahramanmaraş, Erdoğan stated "If God allows, we are preparing a draft law for immediately after the election, which would turn provinces with a population of 750,000 or above in to metropolises." Noting that the draft will be presented to parliament immediately following the June 12th parliamentary elections, Erdoğan emphasized that Kahramanmaraş was also more than well deserving of acquiring metropolitan status.
"Do you know what the limits of the new metropolis will be? It will be the territorial border of Kahramanmaraş… In other words, it will be entirely encompassed as a metropolis, including Afşin and Elbistan, all of it. The metropolitan structure in Kahramanmaraş will be identical to that of Kocaeli in Istanbul. Basically, this is an item amongst our national plans. When we talked about a 'crazy project' that was also a part of our national plans. We will not remain at simply increasing the possibilities for Kahramanmaraş, but all of our provinces will undergo significant transformations.'' Stating that by the 2014 local elections, Kahramanmaraş will have acquired metropolis status, Prime Minister Erdoğan went on to state, "Meanwhile up until 2014, any provinces that have a population surpassing 750,000 will also gain the right to become a metropolis." Mentioning that as of now, eleven provinces have already qualified for this status, Erdoğan states, "I wish you all good luck as of now.'
WE ARE DETERMINED
Speaking at a meeting held at the Kilis Cumhuriyet Square, Prime Minister Erdoğan also expressed the government's determination to battle terrorism.
Dishing up criticism of the Peace and Democracy Party, or BDP, Erdoğan stated, "They say that the government should halt operations and that the military and the police should drop arms. How can the military or police relinquish their weapons? Neither the military, nor the police are extremely interested in staging operations. If there is terrorism somewhere and public order is disturbed, then an operation will be staged."
Erdoğan also called out to the independent candidates supported by BDP, by stating, "Are you going to remain silent against these statements of conflict and violence? Are you going to remain silent when Apo is referred to as 'a prophet'?