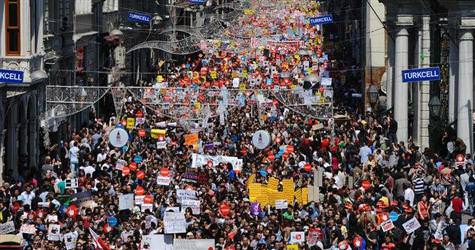 A number of cities throughout the country staged marches yesterday carrying signs reading ‘Don’t Touch My Internet” in protest of a new regulation to filter internet access, planned to go into effect on August 22nd.

According to the BTK's, the Prime Ministry's Information Technologies Board's, 'Internet Safe Usage Regulations' it will be compulsory for internet users to select one out of four internet access option packages.
Yesterday, nationwide protests were held against the 'Internet Safe Usage Regulations', scheduled to go into effect on August 22nd. The largest of a number of simultaneous marches organized over the internet and staged throughout the country took place in Taksim, with thousands marching from the square to Tünel, carrying signs that read 'Don't Touch My Internet'. A number of well-known celebrities including famous performer Haluk Levent and television personality Okan Bayülgen also came out to offer their support for the cause.
Speaking on behalf of the group, Ezgi Köksal stated that internet users' freedom of expression and rights to information access will not be obstructed. Stating that the BTK has no legal basis for the 2011 regulations, Köksal, went on to state that any announcements that users will not be tracked through the filtering system, is far from convincing.
In Ankara, a group gathered on Sakarya Street to protest the BTK regulations by wearing masks and breaking keyboards.