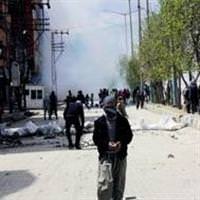 Turkish security forces killed at least 12 terrorists after they were spotted crossing the border from Iraq, the military said on Saturday, while a soldier was killed by a mine blast.

The PKK terrorists were killed during operations Friday and early Saturday in the southeast province of Şırnak, the military statement said.

The soldier died in Hakkari, another insurgency-plagued province bordering both Iran and Iraq. Some PKK fighters operate from bases in the Qandil Mountains of northern Iraq.

The PKK ended a six-month ceasefire in February and there have been fears of rising violence before a parliamentary election on June 12 that is expected to result in a comfortable third successive victory for Prime Minister Tayyip Erdoğan's AK Party.

Jailed PKK leader Abdullah Ocalan has threatened "war" unless the government enters talks after the election to end a separatist conflict that has dragged on for 27 years, killing more than 40,000 people.

The PKK last week claimed responsibility for an ambush that killed a police officer and wounded another in the northern Black Sea province of Kastamonu after an election rally by Erdoğan, and two more police were killed this week.

The PKK says police have been attacked in retaliation for operations and arrests in the southeast. Erdoğan has accused the terrorists of being behind several petrol bomb attacks on the offices of his AK Party.