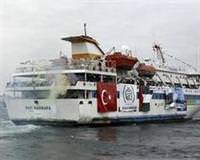 Turkey has warned pro-Palestinian Turkish activists of the risks of trying to break an Israeli naval blockade of Gaza, but these groups are outside government control, Foreign Minister Ahmet Davutoğlu said on Tuesday.

Israel had asked Turkey to prevent activists planning to join an international aid convoy to the Palestinian enclave next month, in a re-run of events that led to Israeli marines storming Mavi Marmara aid ship and killing nine Turkish activists on May 31, 2010.

"We will warn our citizens about the possible outcomes," Davutoğlu told A News. "But the idea of non-governmental organizations being under control of the government in Turkey is an orientalist approach."

"The expectation of Turkey to do something Western countries can't do is a reflection of the opinion that Turkey limits democratic freedom. We will take the necessary measures we had taken last year, but the main source of the issue is Israel's blockade."

He said Turkey's stance had been conveyed through Israel's ambassador in Ankara.

The Mavi Marmara incident led to a breakdown in relations between Turkey and Israel, though ties were already strained.

A UN panel is expected to submit a report to Secretary-General Ban Ki-moon in coming days on the killing of the Turkish activists by Israeli marines.

The Mavi Marmara was the main ship in a a flotilla of six vessels intercepted by Israeli forces in international waters.

With the anniversary of the incident looming, the Free Gaza Movement, a pro-Palestinian activists group, is planning for an international convoy of 15 vessels to set out for Gaza from various parts of Europe, including Turkey, in late June.

"The ships are expected to depart from Europe in the third week of June, which means we will probably leave Turkey a few days after they do and meet them somewhere on the route," IHH spokesman Serkan Nergis told Reuters in Istanbul.

Turkey wants Israel to apologize for its actions on the Mavi Marmara and compensate the families of the men shot dead.

Israel says its marines had been attacked by activists wielding metal bars, clubs and knives.

Davutoğlu warned that if the UN panel's report contradicted the findings of a UN Human Rights Commission report last year Turkey would lodge its reaction with the United Nations.

He said the commission's report had noted Israel's Gaza blockade was illegal, it was a crime to kill civilians and the intervention had violated the rules of international law.