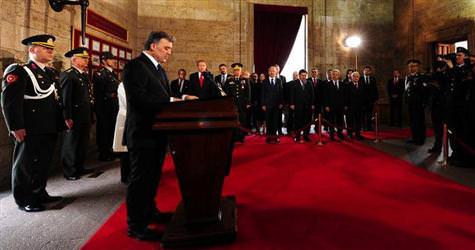 May 19th Youth and Sport’s Day, a holiday dedicated to the youth by Atatürk on the date when he launched the struggle for the nation’s independence, is being celebrated throughout Turkey, Northern Cyprus as well as by all of our other foreign representatives.

Celebrations began this morning at the Ankara Anıtkabir, as state leaders; led by President Abdullah Gül paid a visit to Atatürk's Mausoleum.
Participants paraded down Aslanlı Yol to arrive to Atatürk's mausoleum. Once President Gül laid a wreath on Atatürk's grave those present held a moment of silence in respect of the founder of the republic, followed by a reading of the National Anthem. Later, Gül and those accompanying him moved on to the Misak-ı Milli Tower where President Gül signed the special Anıtkabir journal.
ANKARA
After the visit is paid to the Anıtkabir, a ceremony will then be held at the Ankara 19 Mayıs Stadium. President Gül will also be in attendance.
At 13:00 today, President Abdullah Gül, will welcome Youth and Sports General Director Yunus Akgül and the youth representatives accompanying him, who will participate in the ''29th Youth Week'.
The Military Academy Command will be holding a panel today, entitled "Mustafa Kemal on the road from Istanbul to Samsun." This evening at 20:00, the Presidency Symphony Orchestra will be performing a concert for May 19th.
ISTANBUL
In Istanbul, celebrations began at 09:30 this morning with the laying of wreaths at the Taksim Republic Memorial. Celebrations will continue at the Türk Telekom Arena Stadium.