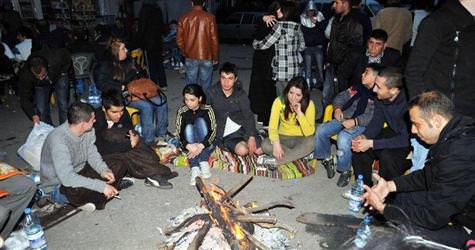 An earthquake with a magnitude of 6.0 shook northwest Turkey on Thursday evening, causing some damage, and one person died jumping from a building as the quake struck, the local governor said.

The epicenter of the quake was 50 miles (80 km) west-southwest of the town of Kütahya, the U.S. Geological Survey said. The tremor also shook buildings further north in Turkey's largest city Istanbul
"A citizen panicked and died after jumping from the window," Kütahya Governor Kenan Ciftci states. An empty university building collapsed in the quake, which also shattered windows in some buildings.
Turkey's Kandilli earthquake observatory said the quake, which struck at 11:15 pm, had a magnitude of 5.9 and that its epicenter was in the district of Simav in Kütahya province. There was also a series of aftershocks.
Residents of Kütahya waited nervously in the town's streets after the quake while ambulances were sent out in the affected area as a precaution.
Major geological fault lines cross throughout Turkey and small earthquakes are a near daily occurrence. Two large quakes in 1999 killed more than 20,000 people in northwest Turkey.